Simpson Wong to Open Wong on Cornelia Street Next Month

Share All sharing options for: Simpson Wong to Open Wong on Cornelia Street Next Month

Simpson Wong, a chef who made a name for himself at Jefferson, and then later Jefferson Grill (both closed) and Cafe Asean, has a new project in the works. He will open Wong, a new "Asian Locavore" restaurant at 7 Cornelia Street sometime in late August or early September.

While Cafe Asean has been a casual kitchy neighborhood West Village favorite for 15 years, Wong will be a tad more refined and will offer a accessible menu featuring local ingredients, grass-fed beef, and sustainable foods with an Asian flair in a communal setting. Though the menu will primarily be influenced by Southeast Asia, executive sous chef Bun Cheam, recently of Commerce, tells Eater today that it is inspired by all Asian cuisines, offering cross-cultural items like freshly baked Naan flatbreads and a variety of sashimi. The restaurant's Facebook page actually has quite a bit of food porn (scallops with duck tongue, Fluke crudo with smoked pineapple, oxtail egg noodles) for those who want to take a peek at what's in store. The restaurant will seat around 40.

Click through for a look at what it should look like when it opens. Four points for any reader who can guess which everyday item they're using to cover their hanging Edison bulbs. 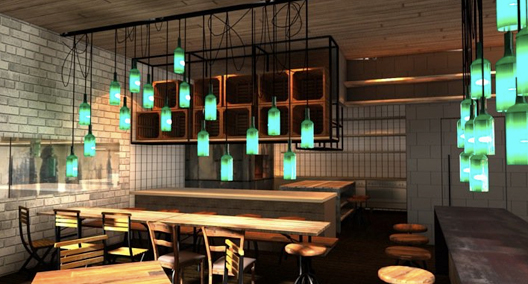