Philippe Vongerichten Looks Back on 14 Years of Jean Georges

Share All sharing options for: Philippe Vongerichten Looks Back on 14 Years of Jean Georges 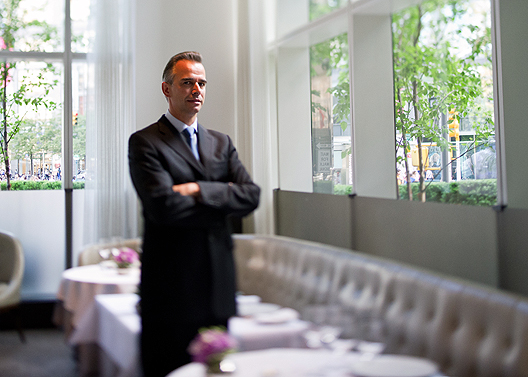 As General Manager of Jean Georges, Philippe Vongerichten oversees both the grand three Michelin star dining room, and its more casual, but still elegant counterpart Nougatine. Even if you don't have a reservation, Philippe can probably find you a table.

Philippe Vongerichten, General Manager of Jean Georges: I'm Jean-Georges's brother. I came to New York in 1991 and was only supposed to stay for six months to open JoJo, but I never left. I started as a backwaiter, became a waiter, then a maitre d' at JoJo. In 1996 my brother told me that he wanted to open a fine dining restaurant, and he asked me if I wanted to follow him. I said yes, so I've been here since day one, pretty much since the construction.

It's 8 PM on a Saturday night. Is it at all possible to walk in and get a table? As a walk-in, always, definitely. For me, if someone is here in the restaurant, they are very important. They've already taken the steps to come here. I do everything possible to find them a table, and something almost always works out, either because there's a no-show, or a party will call and say they are running late. If I can put them in Jean Georges or Nougatine, to me it's more important than anything else.

Anything I can do to make my wait shorter? Cash or gifts? No, I mean, no. We don't do that here because we're pretty busy. We don't take any cash or whatever. Everyone is a VIP as soon as they're here, and we don't take any bribes or money or anything like that.

Tell us about some of your favorite customers. Our favorite customers? We have a lot. [laughs] We've been open now for 14 years, and we've developed quite a few regulars. It's amazing because at Jean Georges we have a lot of regulars for lunch, and then at dinner we have more regulars for Nougatine. Nougatine has turned out to be a lot more like a neighborhood restaurant. I realized when I moved from JoJo on the East Side, to Jean Georges on the West Side, that it's a different crowd. The demand is different, the attention is different. At JoJo, the regulars wanted the same dish. Every night they go to a different restaurant, so that was more the focus — to make sure the meal is amazing. Here, they want a good meal, but they want the attention of the person. They ask, "Is Philippe here? Is Jean-Georges here?" They feel comfortable with your presence. It's what [Sirio] Maccioni brings to Le Cirque — that presence. I don't have that same presence and he is a master at that. But on the West Side they are asking for you, they want you there. We have close to like 80 different guests who come at least four times a week — that's a lot.

How do you deal with a VIP when there are no tables left to give? Let's say that a VIP walks in, he called at the last minute, and we don't have his usual table — of course we try to tell him on the phone. That's when we have to talk to him, apologize, and offer him an alternative. Sometimes guests don't like that alternative, but then we give them a little more attention — sometimes I send Jean-Georges over, sometimes we send a middle course. They know we care about them, but because they know that they didn't get what they wanted, we still have to make it up to them. And you know what? A lot of those regulars will make a reservation on the way out for the next night, and make sure that they have the table they want. We have to show them that we care about them, and it works.

What's the strangest request that you've been able to accommodate? The craziest thing was actually a hotel guest from North Carolina. He was the gentleman that created the lenses for all the cell phones. So, he was a walk-in at 2:30 in the afternoon, he ordered a burger, and then he asked for the wine list. He took a 1780 Lafite Rothschild. At the time that was like a $25,000 bottle, and the guy had a burger for $18. You'd think somebody that ordered a bottle of wine like that would want to have a feast, but the guy was by himself, and he wanted a burger with French fries. So I said to Jean-Georges, "You know, the guy has a bottle of wine for $25,000, I think we should comp him the burger." I really like the extremes of that meal. I have never seen anything else like that in all my 20 years in New York City.

Any requests that you could not accommodate? The big thing I teach my staff is to never say no. That's the first thing, we alway try to find an alternative to what they like, and we always accommodate them. Sometimes they say, "Oh, I really like only this one fish," and we know what type of fish that it is, so we will direct them to another fish that's like it. We have some people that want a steak with an egg on top. We don't have it on the menu, but we do it because that's what they want.

How do you think this restaurant has changed over the last 14 years? When we opened Jean Georges, I would say our average clientele was like 50 years and older, and now we have a clientele who is like 25 years and older. I think those young people have a business or they work on Wall Street or somewhere, and they love good food and they go out. In New York City, in my 20 years here, it's amazing how it's changed. There were some incredible restaurants, but not a lot, and now it's like the capital of the world of food. So with the clientele, the challenge is much greater than it was 14 years ago, because the expectation of the guests is much bigger. They are looking for more details in service, and more details in food. They are much more educated. It's a greater challenge for us, but it makes it more fun. They taste some of the flavors that Jean-Georges created, but they don't know what's inside, and for us it's fun to describe to them how it's made.

Do you think you will get re-reviewed by the New York Times soon? Yes. I think we're getting there. Per Se had their review right before us, so I don't know if they are going to be reviewed before us, but you never know. So yes, we're always on the look out, on our tippy toes to make sure. The way we work is like a synchronized wheel, and the wheel has to turn always at the same speed, even if it's busy or slow. The guest has to feel that we are not rushed, and we have to translate that to the staff, and that's sometimes the hardest part. But yes, I don't know if it's going to be this year or next year, but a review is always something to think about.

What does Jean Georges offer diners that the other four star restaurants don't? Well, the first thing is the price. We are the cheapest four star restaurant in the city. We have a lunch prix fixe for $32. I don't want to say that it's a steal, but it's a deal that is amazing. If someone cannot afford the dinner, they can come at lunch — it's much cheaper and it's really only one or two items less. I think all the four star restaurants are different. From Per Se to Daniel, we have so much diversity. Of the two tasting menus we have, we have the classic one we started 14 years ago, and now we have a second tasting menu that is more seasonal. I think that Jean-Georges's food is really unique. He travels so much, and his flavors and mix of herbs and spices are so different than what you'll find at any other restaurant.

Where are you eating when you're not here? Jean-Georges goes out a little bit more than me, but on Monday nights we go to Marea after service, because we just want a bowl of pasta.

Do you still like working with your brother after 20 years? Oh yeah, I love to work with him. We've changed a lot of things. We always have discussions about the menu all the time, we have an amazing relationship. We're seven years apart, and he left to do his apprenticeship when he was 15-years-old and I was eight, so we never really grew up together. We only really discovered each other when I moved to America.
· All Coverage of Jean Georges [~ENY~]
All Previous Editions of The Gatekeepers [~ENY~]