A Tour of The New Meatball Shop with Michael Chernow

Share All sharing options for: A Tour of The New Meatball Shop with Michael Chernow

Welcome to Explain Your Tchotchkes, a new feature where Eater asks restaurateurs about why they picked the decorations, knickknacks, and other notable design details in their dining rooms. Today: Michael Chernow, the co-owner of The Meatball Shop, which just expanded to Williamsburg. 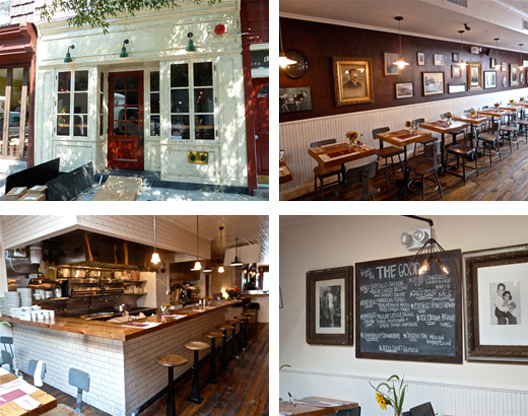 The new Williamsburg location of The Meatball Shop opened to a packed house on Monday night. It has a much larger dining room than the original on Stanton Street, with a bar, seating around an open-kitchen, and about twice the number of tables. The space is also filled with many photos, paintings, fixtures, and signs which co-owner Michael Chernow hand-picked or designed himself. Here's a tour:

Michael Chernow, co-owner: "Aesthetically, I have this real affinity for this 1920s style, this old New York institution kind-of-place that looks like it's been here for a long time. That's the same thing I did on Stanton Street and I did it here, except I was able to be a bit more creative with the actual fixtures, because I designed them." 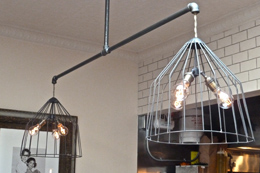 "There's a guy that I work with, Paul Sperduto of Moon River Chattel on Grand Street down here in Williamsburg, and he has a lot of this stuff hanging around his store, like this metal frame here. So, I was able to be like, 'Yo, that would be awesome if we could put a three bulb cluster over the communal table.' So he mocked it up, we had a couple of different proofs, and we came to these." 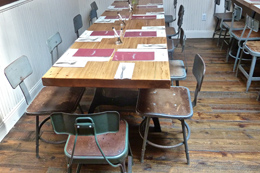 "I love these old industrial-style factory chairs. In my mind they look really great, and they were made in the '30s, so if they're still surviving now, chances are they can withstand the volume of The Meatball Shop. They're comfortable, they have a little bit of spring back, and I was able to get my hands on a bunch of them. Paul from Moon River sourced them for me."

"So, the south wall of the restaurant is just me running around Pennsylvania, New England, upstate New York, and some parts of Jersey to flea markets, just looking for things that I really liked." 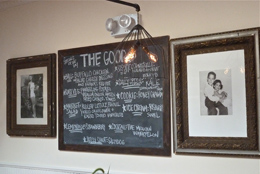 "The pictures on this white wall here, that's actually my grandmother on the left, and that's my father and my aunt on the right." 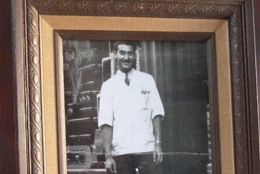 "On the wall by the bathroom, that's a picture of my grandfather. He was a butcher in Harlem."

"There's a couple of pheasants in the restaurant, because before we opened up The Meatball Shop on Stanton Street, [Chef and co-owner] Daniel [Holzman] and I decided that it would be smart to take a male bonding trip. So we went up to the White Mountains in New Hampshire, and we took this camping trip, and we were definitely biting off a bit more than we could chew with that one. The terrain was intense and the weather was just about as bad as it gets. We were walking up on the trail one day, and in front of us we saw a pheasant, probably 50 feet ahead, and the pheasant wasn't moving, it was sitting right in the middle of the trail. As we got closer, we thought it was going to scurry off, but it didn't. The pheasant was actually guarding its nest that had fallen from the tree or something like that, and the pheasant attacked us. Full-on attacked us, and Daniel went off running." 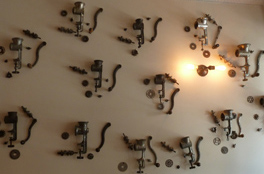 "In the front we have our meat grinder wall. I collect these old meat grinders, and I disassemble them and put them up on the wall, and people use them as coat hooks." 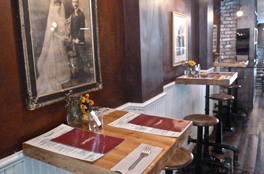 "I love wedding pictures because weddings are where families get together to eat, get a little drunk, and have a great time. So I put the wedding pictures up in the front so people would feel our energy. It's like a wedding every night at The Meatball Shop."

"Dan's mom is an artist, and she did the cow paintings, and the little puppet of Honest Abe, who watches over the dining room."