The Ultimate NYC Barbecue Glossary, A Guide for Beginners

Share All sharing options for: The Ultimate NYC Barbecue Glossary, A Guide for Beginners 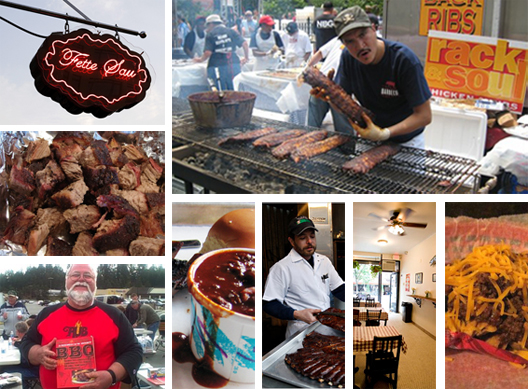 Although some purists think that New York is a barbecue wasteland, there are a lot of great smoked meats to enjoy in this city if you know where to go and what to order. Here's a handy guide to New York City barbecue, full of the most essential info about the big players, the different styles, the restaurants to avoid, and the ones to seek out, in glossary form.

Big Lou Elrose: A former New York City cop who started a smoked meat cart in Ozone Park, was tapped to man the fires at Hill Country, and then moved to Wildwood, where he is currently the chief pitmaster.

Brother Jimmy's: Beer, bros., and barbecue. Not the worst, far from the best.

Burnt Ends: Flavorful morsels cut from the triangle-tip of the beef brisket. Due to the high fat content, this part of the meat is cooked longer than the rest.

Central Texas-Style: Dry-rubbed meat cooked over indirect heat from pecan or oak wood coals. Traditionally served on butcher paper, with bread and pickles on the side.

A Gallery of Superior Sides:

Dinosaur: The menu is a grab bag of different regional styles, but all of the barbecue dishes are good and the smoked chicken wings are the stuff of legend.

The Empire: A special meal at R.U.B. that includes beef, pork, pastrami, ham, turkey, chicken, sausage, two large sides, a quarter rack or ribs, and a bottle of Dom Perignon. $288.75.

Fette Sau: The four-year-old hipster barbecue joint that still packs 'em in every night. Fette Sau uses a gas/wood smoker, and their barbecue does not adhere to any particular regional style.

Georgia's Eastside BBQ: Casual LES restaurant that serves a greatest hits list of barbecue and Southern foods, but does not use a smoker — they boil their meat in beer and put it on the grill.

Hill Country: The mothership of Central Texas-style barbecue in NYC.

Kansas City-Style: Dry rubbed meat of all cuts that are smoked (generally with hickory), then served with a thick tomato and molasses-based sauce.

Mable's Smokehouse: An unpretentious new Williamsburg restaurant that serves a tiny menu of Texas-style barbecue, all priced to move.

Memphis-Style: Most famous for smoked dry-rubbed ribs, but also smoked ribs that are brushed with a tomato and vinegar-based sauce.

Neely's Barbecue Parlor: The new Memphis-style barbecue restaurant from Pat and Gina Neely, the stars of Down Home with the Neelys. Wade Burch of the Merchants Hospitality group runs the kitchen.

Paul Kirk: One of the most highly-decorated pitmasters in the country; proprietor of R.U.B. in Chelsea.

Rack and Soul: An Upper West Side restaurant from fried chicken king Charles Gabriel and competition pitmaster John Wheeler. The pork butt is the star of the show.

Robbie Richter: A young gun pitmaster from Queens who helped open Hill Country, then Fatty 'Cue. He is now a free agent.

R.U.B: A Kansas City-style barbecue joint that's a great place to go both on a budget, or with cash to burn.

Southern Hospitality: A theme restaurant that was once co-owned by Justin Timberlake. If you find yourself here, order the Memphis-style ribs.