Upper West Sider Begs and Pleads for an Otto Expansion

Share All sharing options for: Upper West Sider Begs and Pleads for an Otto Expansion

In a message to the tipline this week, a reader suggested a new feature in which Eater fans beg/plead/pitch their favorite restaurateurs for a new concept in their respective neighborhood. He's going to get the ball rolling. Want to play? Email tips@eater.com. 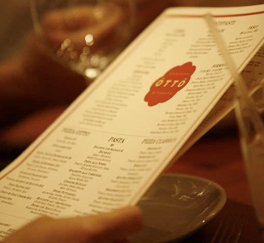 Here, Scott L., and Upper West Side veteran of 15 years, writes, "Having lived in the area for 15 years, You can count the good places in the neighborhood on one hand." He's asking Mario Batali to help a guy out:

Please Big M, put one of your restaurants on the UWS. You could go the no-brainer route, and carbon-copy OTTO. Im not going to get greedy and demand a Casa Mono, or a Babbo, but the cheap pizza/pasta, expensive wine haven would be a smash hit in our neck of the woods. You need a cavernous space? No problem. Calle Ocho is moving out of their 6,000 sf space on Columbus Ave. Mario Batali and other restaurateurs need to capitalize on the fact that as a species, Upper West Siders generally do not leave their neighborhood.

We are talking about a captured and contained audience. Think of people trapped at the airport bar, but on a much larger scale. On the very rare occasion that new place opens, and its even remotely good- It has to beat back the hordes. I submit Mermaid Inn that opened on Columbus in 2007 as Exhibit A. Packed. Packed. Packed. A place like OTTO would have lines out the door for years to come. Not that Mario necessarily needs a new restaurant. He would be doing it for us, the poor, hungry folks West of Central Park. After all, one can eat at Telepan, Dovetail, Bar Boloud, and Ouest only so many times.

Scott we feel your pain and will send this on to MB's people.
· All Coverge of Otto [~ENY~]