Love, Alcohol, and Tickling the Ivories at Brandy's Piano Bar

Share All sharing options for: Love, Alcohol, and Tickling the Ivories at Brandy's Piano Bar 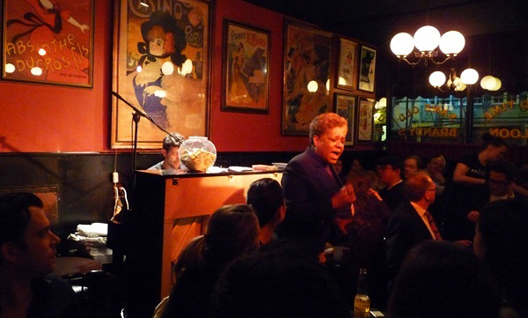 The words on the windows outside Brandy's Piano Bar, tucked on a quiet block of E. 84th Street, read "Same Old Brandy's" and "Good Time Saloon." As you can deduce from those two messages, Brandy's has been around a while, and what you find inside in terms of entertainment is on the old-fashioned, even slightly corny side. But few watering holes in the city are more comfortable and welcoming to their regulars.

The beefy, but sweet-natured bartender, Joe, serves his middle-aged barflies with a "honey" and "darling" or "bitch," depending on the nature of the remark they just made. (And they've always just made a remark, usually of the double-entendre variety.) When Eric Clapton's "Wonderful Tonight" comes on the radio, and a patron asks "Don't you think this is just the most beautiful song ever?," Joe answers "No."

Joe also sings, as do all the waitstaff at Brandy's, lending their voices to whomever the nightly pianist might be. But Joe won't sing tonight; he's under the weather. Besides, he's got Maria, the new waitress, to train. Though it's her first night, Maria already seems to be known by the regulars. She passes around pictures of her girlfriend on her cell phone. A man walks in from taking a smoke on the sidewalk. "There were three marines hovering around out there," he says. "It's Fleet Week," observed Joe. "I sent them down to Trinity Pub," continues the smoker. "I blew it."

Brandy's bar is old. Its lighting fixtures are old. Its coat hooks are old. The framed pictures of antique French aperitif ads are old. There's always been a bar at this address; some tell me a speakeasy operated in this space during Prohibition. It was just plain old Brandy's in the 1960s and '70s, a singles bar that served all-you-can-eat mussels and clams on Monday nights. In 1980, it was taken over by owners of the Duplex in Greenwich Village, and became Brandy's Piano Bar. Recently, it took on a literary patina. Perkus Tooth, the reclusive, rock critic hero of Jonathan Lethem's "Chronic City," lives in an apartment above Brandy's. Perkus never goes into the bar.

Michael Isaacs, the entertainment for the evening, bursts in, a ball of antic energy. Dressed in a t-shirt and baggy cargo shorts, with purposefully unkempt blonde hair, he looks like Owen Wilson and acts like Woody Allen. He futzes around with the lighting equipment around the black upright piano—which sits opposite the beaten old bar, surrounding by small, round, black cafe tables—and gathers up a store of water bottles and tiny cans of pineapple juice. Maria takes these to wash in the bathroom sink. "Oh, Maria," calls Michael, "you don't have to participate in my neurosis."

Brandy's clientele is primarily gay, but, once the music starts (around 9:30 or so) the crowd grows more heterogeneous, with straight couples and tired businessmen added to the mix. Later on, a group of plastered yahoos and their girls wander in and proceed to ignore every sign in the place ("No Dancing," "Please Keep Talk to a Minimum Out of Respect to the Singers," "No Cell Phone Use. Take It Outside"). "Take a seat," says Maria, "There's a million of 'em."

Isaacs—who shoots tart barbs and dagger-eyed glances in the yahoos' direction between songs—hits the keys like a hammer, and sails through top-volume, big-hearted versions of songs by the Beach Boys, The Bee Gees, Prince. Maria, leaning against the bar, occasionally shakes a tambourine. Isaacs step out from behind the bar after every number and takes an elaborate, from-the-waist bow. The crowd claps warmly. "It's all about love," says Isaacs, "and alcohol."
— Robert Simonson