Every once in a while we like to take a look at the rich history of a restaurant that has survived for generations, outliving trends, critics, wars, Prohibition even. Today, the revered, deceased, and eventually revived Delmonico's. 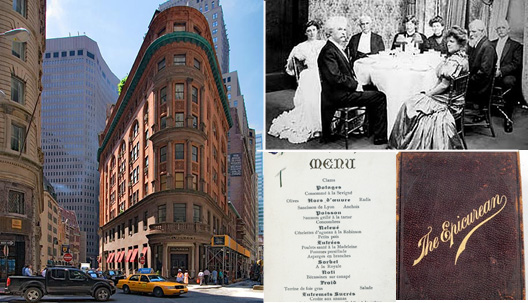 Delmonico's, the restaurant that now occupies a triangle of a building down in the Financial District, is widely known as the restaurant that changed New York dining forever. The restaurant has existed, through different owners and permutations, over 184 years and over eight locations and enjoyed a reputation as the best fine dining restaurant in New york for over six decades. Here's a look at the life and death and dubious revival of Delmonico's:

From the early Dutch settlements up until the late 1820's when Delmonico's opened, there was little by way of restaurants. Taverns opened in the 1700's and oyster cellars and coffee houses could be found relatively easily, but there were no proper sit down restaurants, no cafes. When the Marquis de Lafayette returned to the city in 1825, and when the first steam ship completed a trip from Albany to Manhattan, it was seen as a public embarrassment that New York offered nowhere for a celebration.

In short, New York was a fine dining desert until the arrival of John (Giovanni) and Peter (Pietro) Delmonico, Swiss brothers who used $20,000 in gold coins they saved to open a cafe serving French pastries at 23 William Street called Delmonico. They opened, along with nephew Lorenzo, in 1827 and by 1831 they evolved into a full fledged French restaurant by expanding into the building next door. Soon enough, competition sprouted up in the wake of their success and a dining society was born. The restaurant also represented a cultural shift toward French dining. At the time, all of the best home cooks were preparing traditional British fare, and American cookbooks were British in nature. 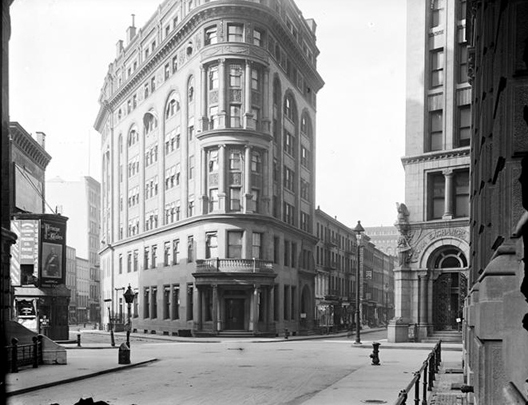 [Delmonico's on Beaver and William streets, by Robert L. Bracklow, 1849 - 1919. From the Collections of the Museum of the City of New York. [link]

In 1835, the original location of Delmonico burned down in a massive fire that swept downtown Manhattan, taking out over 700 buildings. Luckily, the brothers and their nephews had opened a hotel on 76 Broad Street the year before and moved much of their operations there. At the same time, they began construction on a completely new space at Beaver and William Streets (2 William). They opened the grandiose William Street Delmonico's (aka The Citadel), complete with three floors and private dining rooms and pillars allegedly imported from Pompeii in 1837. This is the home of the restaurant known as Delmonico's today, and it was the grandest restaurant New York had ever seen. More than ever they were able to cater to elite customers, as the city flooded with well-off foreigners and Americans amassing fortunes. They threw balls, held ceremonial dinners for the likes of Charles Dickens and Mark Twain, hosted cotillions and for the next 60 years held the reputation of being one of the finest restaurants in New York.

In 1834 the Delmonicos bought a farm in present day Williamsburg to grow produce for the restaurant. In Appetite City, author William Grimes notes that an 1838 menu offered squab, hare, quail, pheasant, grouse, venison, and wild duck as well as salmon, mackerel, artichokes a la Barigoule, salsify au jus, eggplant and more. The famous Delmonico steak was added to the menu in 1850, and Delmonico's potatoes, mashed potatoes covered in cheese and breadcrumbs, were a favorite of Abraham Lincoln.

After the lodging house at 76 Broadway burned down in 1845, they rebuilt The Delmonico House above Bowling Green at 25 Broadway and operated it as a straightforward hotel that was the first to offer meals a la carte, instead of included in the room rate. In 1842 John died and in 1848 Peter sold his interests, leaving the restaurant to nephew and big dreamer Lorenzo.

Seeing the world migrating north, Lorenzo let the lease run out on the hotel and opened a flagship Delmonico's on Chambers and Broadway, just north of City Hall, in 1856. Six years later, he went further north still and opened a branch in a three story building overlooking Union Square on 14th Street and 5th Ave. Here, Lorenzo hired his nephew Charles Delmonico to run the show, who in turn hired chef Charles Ranhofer to helm the stoves. Ranhofer, considered one of the great chefs of the day, would go on to work for the restaurant group for 35 years, host thousands of banquets, create hundreds of dishes (including Lobster Newburg and baked Alaska), and compile them into a book called The Epicurean.

Lorenzo opened another Delmonico's at 22 Broad Street in 1865, to cater to Wall Street types. Then in 1876, after watching fortunes migrate north yet again, he closed his Union Square Delmonico's and opened one at 212 Fifth Ave at 26th Street, across from Madison Square, where a number of ritzy hotels had just opened. For years it enjoyed success at the center of a newly established theater district and shopping hub.

In 1881 Lorenzo died, followed four years later by Charles. At this point there was plenty of competition all over the city, and the restaurant group began to be seen as a symbol of the past.

The final Delmonico's opened in 1899 up on 44th and 5th Avenue and was just as grandiose as the rest with ballrooms, private dining rooms, electricity, and all the modern luxuries. But by 1923 all of the family owned Delmonico's had closed. The Madison Park location's lease ran out and business wasn't strong enough to keep the chain afloat. The company hit financial hardship as ownership switched from heir to heir following family deaths. The changing dining habits during the Prohibition put the final nail in the coffin. 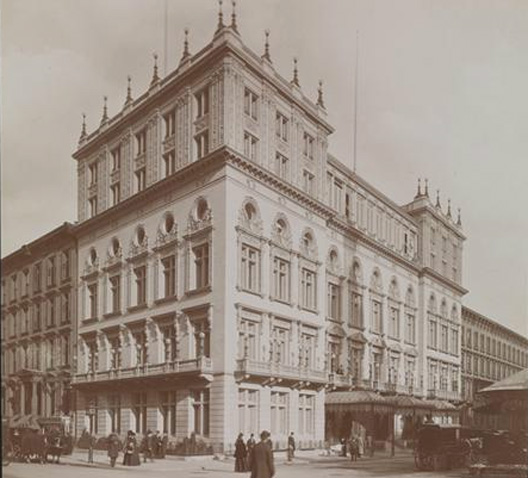 [Delmonico's 44th St by Byron Company, 1898. From the Collections of the Museum of the City of New York. link]

Of course that's not the actual end. Throughout the years several copycat Delmonico's opened up around town, including one in the original Citadel Delmonico's building at 2 South William Street (at Beaver) in 1929 called "Oscar's Delmonico's." Though the family protested, a judge ruled that the name was public domain after the closure of the last restaurant in 1923. Oscar's Delmonico's served many of the restaurant's original dishes and operated until 1977. It reopened in the same space from 1981 until 1992, after which the building sat vacant until the Bice Group bought it and opened it up as a Delmonico's again in 1999. Now a company called Ocinomled runs it. They still serve Lobster Newburg.