A Review of ABC Kitchen by Francis, The Flowery Food Critic

Share All sharing options for: A Review of ABC Kitchen by Francis, The Flowery Food Critic

Every once in a while we like to run a review from Francis, the flowery food critic. She's a frisky girl, living in the big city, and she has a voracious appetite for both food, and men. She used to work at an alt-weekly, but it folded not too long ago. Take it away Francis: 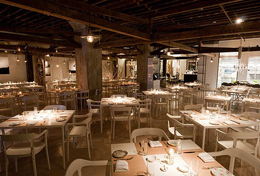 Is ABC Kitchen a farm-to-table restaurant? A barnyard bistro? A greenmarket gastropub? I'd say it's more like a culinary roll in the hay with masterchef Jean-Georges, and strapping stable boy Dan Kluger. On any given night, you'll find tip-top toques, tripping the light fantastic, with their toothsome toasts and titillating tartars.

The space is unassuming: lots of soft browns, milky whites, rich creams, and splashes of yellow — like a latte, with two Splendas, natch. After scoping out the dining room on our first visit, hubby Jeremy was not impressed. "I hate this place," he said, "let's go to Old Town. The game's on." I, however, was smitten with the room — the design reminded me of a cherished Moleskine journal, a comfy pair of moccasins, or the apartment of a friendly drug dealer. "Let's stay," I said, "I've got a feeling we're going to like this place."

First up was a plate of sublime chicken liver toast, a simple dish of flour and foul, bird and bread, crust and coop. Next came the mackerel sashimi with ginger and mint. The delicate fish had the mouthfeel of a freshly cut mango, or French foreign exchange student — a bite that you want to savor, knowing that its pureness is fleeting. But best of all was a lentil soup, thick, brown and smelling of the earth — like gruel from some glorious kibbutz. I was on cloud nine after this appetizing menage a trois. Jeremy was on his iPhone, getting the stats for the game. No matter: the main courses were up next.

We sampled many a joyous entree that night, but the standout star was the braised lamb shank: an unctuous plate of meat, kissed by an herbaceous parsley root puree, and a rustic horseradish cream. As you get closer to the bone, the flesh tastes like the very essence of the musty earth. In truth, I haven't experienced such rogue delights since my sophomore year at Vassar.

Then came the organic fried chicken: a heartland classic, reborn as a West Village queen. This fried fowl is a feast for five fingers. Swallow your pride, and dig in. 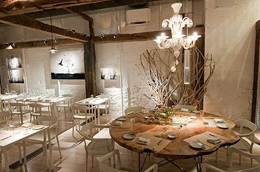 The steamed cod was the only dish that failed to make the earth move, under my feet. It lacked vibrancy, zip, and most importantly, salt. What's a girl got to do to get some Morton's up in here?

As a side, I do recommend the roasted beets, if they are available. These buttery bulbs are beatific, and full of fresh-from-the-ground bravado. The accompanying housemade yogurt sauce is like a jaunty trip on the Marrakesh Express, with a hash cigarette between cars from a tall, dark stranger.

When the plates were cleared, Jeremy remarked "I'm still hungry." Hungry for more of Jean-Georges and Dan's duet of decadent delights? "Remember," I said, "all good things come to those who wait."

And those good things came as a bowl of warm bread pudding, beneath a sizable, supple orb of creamy pear ice cream; sublimely artery-clogging doughnuts with bacon-fudge; and an old-fashioned sundae with candied peanuts, popcorn, and chocolate sauce. This last dish was like a sloppy kiss, followed by a playful bite, and a frisky feel.

As we were leaving, Jer-Jer asked, "Can we get some wings at Old Town now?" I refused — I don't do sloppy seconds in the bedroom, or the dining room, and besides, I already had my fill of wings that night. Wings, of culinary desire, sailing close, but not too close, to the sun. ABC Kitchen is a very fine resto.

· All Coverage of ABC Kitchen [~ENY~]