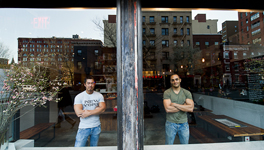 In today's edition of Shit People Steal the owners of beefy West Village restaurant Takashi reveal they've had all kinds of ridiculous things pinched from their small space. Take it away boys:

Sake cups: When a table orders a carafe or bottle of sake, we have a beautiful selection of antique sake glasses that each guest chooses from. Unfortunately, some love our glasses so much that they have taken them home. We've had to replenish our selection at least four times since we opened (last year). We continue to offer the tray because our guests love the personal touch, but some take the notion of choosing your glass to include ownership of it.

Desert spoons: Takashi's mother mails us desert spoons from Osaka. Each spoon is emblazoned with a colorful, quintessential Japanese cartoon character at the tip of the handle. We're sure it's the parents and not the kids who see fit to swipe these spoons on a regular basis, leading to stepped-up patrols by our busboy at cleaning time. Once, one of our waitstaff caught a customer in the act, and she defended herself by saying she was a designer who found inspiration in the spoon. Our waitress obliged her by pulling out her iPhone and emailing her a photo.”

Tongs for the barbecue: We have a set of sleek, stainless steel tongs for barbecuing beef on the table-top grills. Some customers seem to think ahead to their next barbecue, because we have seen a dwindling supply of the tongs.

Gotta love when these people try to defend themselves.