Donal Brophy on the History Behind Mary Queen of Scots

Share All sharing options for: Donal Brophy on the History Behind Mary Queen of Scots

Welcome to Explain Your Tchotchkes, a new feature where Eater asks restaurateurs about why they picked the decorations, knickknacks, and other notable design details in their dining rooms. Today: Donal Brophy, the co-owner of stylish Lower East Side bar and restaurant, Mary Queen of Scots. 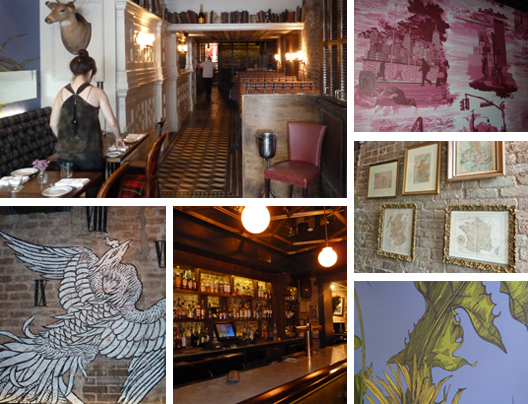 Donal Brophy designed Mary Queen of Scots so that the space tells the life story of the restaurant's namesake royal. The first room represents her idyllic childhood in France, the bar evokes her years spent sailing the high seas, and the back area represents both her imprisonment and execution. Here's a tour:

"We're not huge players, so obviously money is always quite tight," Donal says. "We didn't have the luxury of having an interior designer, but it was great, because it forced us to be creative, and it forced me to search the whole northeast of the United States looking for trinkets and bits and pieces that went well together." 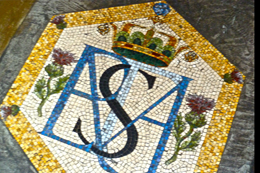 This tile mosaic is the first detail you see when you walk in. Donal notes: "This is Mary's actual royal seal. It includes her family motto, the names Mary and Stuart, and a thistle and rose, which is her symbol. She did a lot of embroidery in prison, and she'd create this seal and send it to all of her favorites, like the pope, just to stay in good terms with all these people. This was made by a small mosaic producer on Wythe Street in Williamsburg, a Russian guy. He's really, really talented." 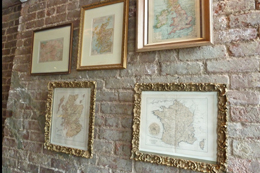 "These are just various maps of essentially Mary's realm, where she traveled and lived. In the eyes of the Catholic Church, Mary was the legitimate heir to the British throne of England. This is essentially her kingdom: France, because she married a French king, England, Scotland, and Ireland, plus a small street map of Edinburgh." 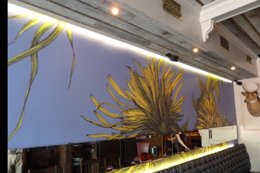 "We have a very tight relationship with this design firm in Glasgow called Timorous Beasties. They do a lot of the design for the Alexander McQueen and Vivienne Westwood stores and stuff like that, but they're good friends of ours. They made this wallpaper especially for us. There's a famous nursery rhyme we used to say a lot when we were kids in Ireland and Scotland that goes, 'Mary Queen of Scots got her head chopped off,' and you get a dandelion, and you flick all the petals off. It's a childhood thing, and represents happiness. Mary had kind of a happy, blissful childhood. She grew up in France in all these really palatial châteaus, and was groomed to be the Queen of France." 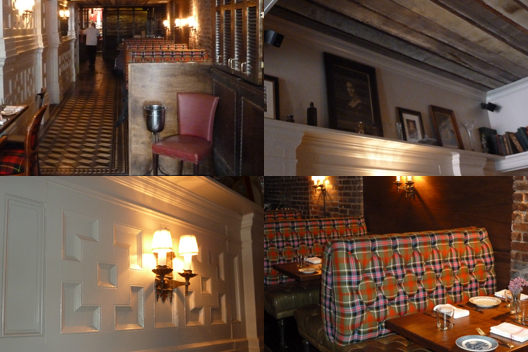 There's a hallway with banquettes that connects the front dining room to the bar. Donal explains: "This area symbolizes a journey, like a trip down the rabbit hole, that kind of plays with your sense of perspective. The banquettes have Westwood tartans, they're very loud and kind of gauche — like crazy pink, blue, and green. I got the wall panels from this antiques store Olde Good Things, they alert me when anything cool comes up. There was a mansion in the Bronx that became a hospital, and then they were completely dismantling it, knocking it down, and these came from there. The shapes are interesting. And the reclaimed wood is from an old apple barn in Virginia, that was being dismantled." 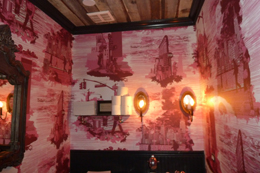 "As you get a little bit farther back, the young king dies and she has to sail back to Scotland to become Queen. And so the bar area has something of a nautical theme, but also the ceiling is an interpretation of the ceiling in her boudoir in Edinburgh. We wanted this room to have the feel of a jewel box." 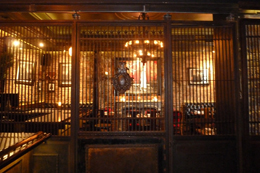 "These are old elevator doors that I got in Pennsylvania. They were rusting like hell when I found them, but we managed to restore them. And these come back and forth so that you can close it off for like private parties and stuff. I wanted the next room to be like Mary's prison, so that's what these bars symbolize." 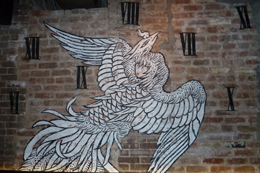 "In the back room, I wanted to represent her time in a gilded birdcage, in prison. During Mary's last years in captivity, she meditated on the phoenix a lot. The phoenix kind of became her symbol, because her favorite saying was, "In my end is my beginning." And the numbers represent the passage of time. This was done by Mike Lucena, who did my tattoo. He's a big graffiti artists in San Francisco, as well." 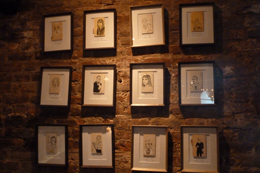 "These were done by another friend of mine, Oliver Jeffers, a very well-known Irish artist. They are small caricature portraits of famous Scottish people: Alexander Fleming, Elizabeth Taylor (whose grandparents were Scottish), Sean Connery, Robert Burns, David Hume, and Bobby Gillespie from Primal Scream."

"This is a painting by Gerard Burns. He actually graffitied some of Mary's famous sayings on the side, including, 'In my end is my beginning,' and, 'No one provokes me with impunity.' And in the red here, you can see, 'No more tears now; I will think upon revenge.' We wanted it to feel like the paintings were almost disintegrating into the wall."

When asked if anyone from England or Scotland appreciates the attention to historical detail, Donal notes: "The Brits kind of love it. Agyness Deyn is in here a lot, and Adele, we had the after party for her concert in New York." The restaurant just brought on chef Chris Rendell, formerly of Public and Double Crown, who has created a menu of light, market-influenced versions of British and Scottish classics. Check out the menu here.

· All Coverage of Mary Queen of Scots [~ENY~]