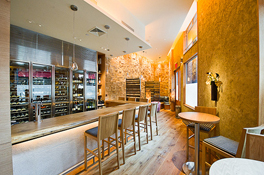 Brushstroke—a collaboration between chef David Bouley and famed Japanese chef Yoshiki Tsuji—has been in the making for nearly a decade, the same amount of time it took Mozart to pen his first 30 symphonies. Dubbing this a product of careful preparation would be an understatement, and one that’s hardly lost on the guy running Brushstroke’s equally thoughtful wine program.

The restaurant’s 28-year-old wine director, Seju Yang, came to America from Japan seven years ago to study music composition. In order to make ends meet he picked up his first job in the restaurant industry as a sake sommelier at Midtown’s famed rice wine den, Sakagura. But he quickly realized that the vernacular he used to describe sake wasn’t resonating with American clientele.

“The more and more I tried to explain the sake, I realized that myself and my guests weren’t talking the same language, because I didn’t know anything about wine,” he says. “For example, if a customer says to me, ‘This sake smells like German Riesling,’ our conversation would stop there.”

Being able to more effectively communicate about sake was how he got into wine. Yang went on to become the opening sommelier at the Michelin-starred East Village restaurant, Kyo-Ya, and then on to one of the city’s great sushi destinations, 15 East, where he had the opportunity to work with wine director Nick Robinson and the international cellar at Tocqueville (the restaurants are under the same ownership). It was there that he fell in love with the wines of Europe.

After leaving Tocqueville he was snatched up by Bouley and offered the opportunity to run his own wine list, the first that he would have absolute control over from conception to opening. As he explains his list, a very personal, musician’s sort of sensitivity pervades. He can talk at length about the melody and harmony of each wine—which he equates to its “terroir” and “structure,” respectively—and how it compliments the delicate melding of East and West that Bouley and Tsuji have so painstakingly conceived.

“Some people tell me that they think I am doing two very different things [composing music and working with wine] but to me it’s very connected,” he says. “Expressing the music and expressing wine seems like very similar things to me, and that connection is what drives me.”

You see, to him creating a wine list is not so different than composing a piece of music. And it’s not so difficult to imagine that Yang likely feels that, after years of conducting the "music" of other composers, at Brushstroke he finally has the gratification presenting his own.

Ultimately Yang's thoughtfulness lends itself to a wonderful featherweight list that leans on the classic wines of Europe and, more specifically, on white wines--from Chablis, the Loire, Austria, and Germany--that place minerality on a pedestal. The Champagne section, dedicated almost exclusively to grower-producers, also hogs a good deal of real estate and makes for the ideal place to play around with a big paycheck.

The list takes a few day trips to the New World, covering a good deal of ground, but it remains restrained and manageable, never sacrificing its focus for canonical flash. The pricing is a bit lower than one might expect from a restaurant of this caliber, in a space like this one, but it’s by no means a bargain bin. Still, rest assured that there’s a handful of handouts for those of us who spend most of our time under $100. Yang also pays tribute to his and the restaurant’s Japanese roots by offering a beautiful list of sake, followed by a well-curated list of half bottles for those looking to mix and match throughout the meal.

There's a lot on the list that's worth traveling for but, more than anything else, what’s not to miss at Brushstroke is Yang himself. He’s had a lot of time to contemplate the symbiosis of his list with the food (FYI, after numerous trials Yang has determined that Blaufränkisch is, in fact, the ideal pairing with tuna) and it’s clear he’s come a long way from his days at Sakagura to find his own unique means of expressing wine.

Bang For Your Buck
Vin de France Blanc ‘Les Fouchardes’ 2009, La Ferme de la Sansonnières $75
Though the Les Fourchades is bottled from 100% Chenin Blanc sourced from within Anjou it, like many of Mark Angeli’s wines, has been denied the ability to be labeled as such. Why? Kookiness and a touch of intentional oxidation that drives the AOC suits up the wall. Anjou or not, this is singular, intensely mineral-driven Chenin Blanc that makes great sense with this sort of cuisine.

Chablis Clos Béru Monopole 2006, Château de Béru $68
After being revitalized in the late '80s this family-owned estate has converted all of their vineyards to biodynamics and have gone back to basics in the cellar, striving for minimal intervention via traditional winemaking techniques. This is an excellent price on the estate’s single vineyard bottling, here with a few years under its belt.

Barbera d’Alba ‘Trevigne’ 2007, Clerico $48
Domenico Clerico is one of Piedmont’s most beloved characters and his wines are directly reflective of his trademark exuberance. As is typical of the house style, this is dark, intense, outgoing Barbera.

Marsannay 2002, Domaine Joseph Roty $75
With nearly a decade under its belt, Roty’s Marsannay is about minerality and earth at this stage, with the immovable fruit character of '02 still brooding in the background. An absolute steal for anyone interested in drinking mature red Burgundy.

Off The Beaten Path
*Timorasso Colli Tortonesi Bianco ‘Pitasso’ 2006, Claudio Mariotto $75
Timorasso, a covert variety that straddles the border between Lombardia and Piedmont, is just now starting to make a dent in the NYC market. Full bodied and mineral-driven with great texture.

Blaufränkisch 2008, Leo Hillinger $46
Austria isn’t all about Grüner, Riesling, and the more-than-occasional sausage. As of late the country’s red wines have begun to make a splash in this market. Here’s one of the country’s most promising grapes from one of Burgenland’s rising star producers. A juicy, loveable intro to the variety.

Under $40
Pouilly-Fumé ‘Les Cris’ 2009, Alain Cailbourdin $38 (375ml)
No options on full bottles under $40, but this halfsie of Sauvignon Blanc from the grape’s spiritual vacation home in the Loire (Sancerre being its homebase), is a fine option. Classic SB with plenty both due to low yields and the fruit-forward nature of 2009. Terrific starter wine.

Grüner Veltliner Wunderberg -Wachau 1995, Kirchmayr $125
Old GruVe from one of Austria’s elite. Aged in large oak barrels with extended lees contact, this is full of nuts, minerals, and a solid dose of fruit still holding court on the palate.

Nuits-St-Georges 1997, Domaine Meo Camuzet $175
Oh hey, Meo Camuzet. Nice value on a village-level offering from one of Burgundy’s greats. The ‘97s tend to throw some of that animal funk, so be prepared. Classic Burg with a decade and a half that should drink in its wheelhouse now.

Chambolle-Musigny Charmes 1er Cru 2000, Domaine Ponsot $140 (375ml)
Though this isn’t in everyone’s price point, Ponsot is often worth the splurge. The 2000 should drink exceptionally well from the halfsie.

WTF?
The only option for non-Champagne sparkling is a Prosecco. It’d be great to see a small selection of sparkling wines as value alternatives to the mostly high-end Champagne selection, especially with this cuisine.