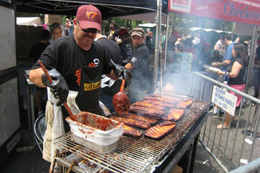 1) Big Apple Barbecue Block Party
Where: Madison Square Park
When: Saturday and Sunday, 11 AM - 6 PM
What: One of the biggest meat fests of the year, with stalls from some of the top barbecue cooks in the south and from NYC. There's also live music both days, including a set on Saturday from Bambi Kino, a Beatles cover band from members of Cat Power, Nada Surf, and Guided By Voices. It's a notoriously crowded, steamy event, so it's best to go early, before the monster lines form, and the stalls runs out of the best dishes. Head over to The Feast and Serious Eats for pro-tips. Admission is free, all plates of food are $8, desserts are $4, with proceeds going to the Madison Square Park Conservancy. 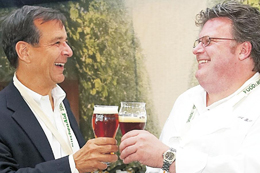 2) Summer Spit Barbecue
When: Sunday, 12 PM - 6PM
Where: Studio Square, Long Island City
What: Another BBQ cookout, from Chef David Burke, and Jim Koch of Sam Adams. They'll be serving pulled pork tacos, chicharones, and bacon-wrapped belly from two whole roasted hogs, plus a number of typically whimsical Burke savory treats like smoked gouda pops, beef fat fries, "angry pigs in a blanket," chorizo grilled cheese sandwiches, and more. There will also be beer and wine tastings, a live bluegrass band, and a cigar lounge. This promises to be a less crowded event than the BABBQ, and something of a value at only $60 per person ($50 in advance). 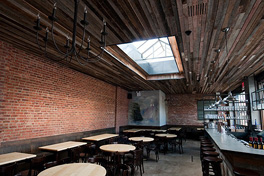 3) One-Year Anniversary Party at Loreley
Where: 64 Frost St, Brooklyn
When: Saturday, 3 PM - close.
What: The indoor/outdoor beer hall next to the BQE is throwing a one-year anniversary bash, with specialty brews, DJs, live music, and a charity raffle. Also: the first 100 guests get a free .3L glass of Hofbräu Münchner Sommer Naturtrüb, a light German summer beer. They're also going to be cooking some special sausages in the garden from Schaller & Weber and The Meat Hook. Link platters are $16-$38. [Krieger] 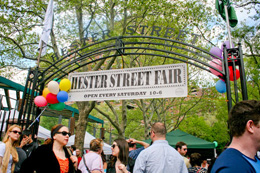 4) Summer Picnic at Hester Street Fair
Where: Hester St. at Essex
When: Sunday Afternoon
What: The Hester Street fair is hosting an all-food market with stalls from 25 vendors, including Peels, Brooklyn Farmacy, Purple Yam, Robicelli's, and The Clerkenwell. There will also be ping-pong, badminton, and tunes from The Red Hook Ramblers. It's like Smorgasburg, but smaller, and in Manhattan. Admission is free. [Photo] 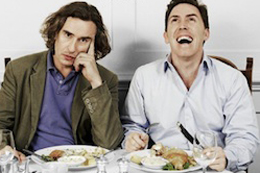 5) The Trip
Where: IFC Center, Lincoln Plaza Cinemas
What: The new food-centric comedy with Steve Coogan and Welsh comedian Rob Brydon, from the director of 24 Hour Party People. The plot centers around a culinary road trip where the actors (playing themselves) stop at some of the best restaurants in England, including L'Enclume, Hipping Hall and the Inn at Whitewell. Looks like Withnail and I meets My Dinner with Andre meets the Travel Channel's No Reservations. Watch the hilarious trailer: 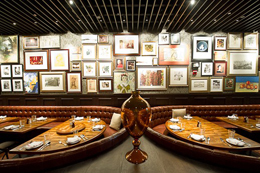 Also of Note: Midtown Lunch is holding its 5th Birthday Party at City Winery today from noon to 3 PM, with all-you-can-eat food from some of Midtown's top vendors. Pre-sale tickets are gone, but there may be tickets at the door for $65 (might be worth calling City Winery at (212) 608-0555 to see if any are left). Williamsburg food market Smorgasburg is open today from 9 AM - 5 PM. This week's lineup includes Sun Noodle, a Hawaii and California-based noodle manufacturer who will be selling a variety of prepared ramen and udon soups, and fresh products to take home. And, if you're looking for a new restaurant to try, consider DC Italian-import Casa Nonna, Seersucker spinoff Smith Canteen in Carroll Gardens, Chelsea Spanish restaurant Salinas, beachy West Village newcomer Tremont, or the Brooklyn location of Momofuku Milk Bar, which features a brand new pork bun. For brunch, take a peek at Eater's map of hot new brunch spots. [Krieger]