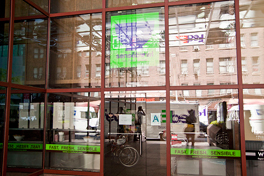 Upper West Side: The West Side Rag reports that TeaGschwendner, a high end retailer of rare and fancy teas, has closed after six months. The signage on the door says they're closed for renovations, but a rep at the Chicago store says the NY branch sent them all of their tea. [WSR]

Ditmas Park: Ditmas Park Blog notes that Himalayan Sushi is no more. And commenters suspect that NYC ICY is closed for good as well. [DPB]

West Village: Robert Sietsema gleefully reports that Bread & Pastry Cafe on the corner of Christopher and Bleecker Streets is doneski. He writes that the pies and pastries always looked great, but "if you happened to buy one of the products, it practically turned to sawdust in your mouth...The pies had been trucked in from somewhere else, and the somewhere else had covered them in a thick glaze, which maintained the appearance of freshness weeks after the pie had been made...Will a real pie shop now please move in?" [FitR]

Midtown: Midtown Lunch notices that Sensebowl is closed. It has been closed for over three weeks with a note stating "Closed for the week," on the door. But no renovations are taking place inside. [ML]
[photo credit]