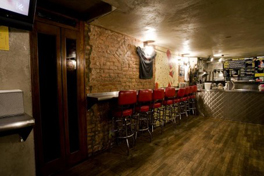 Today's theft report comes from Jim Meehan, owner of East Village cocktail den PDT. It's a bar in which the phone, located in a phone booth accessed off the side of hot dog shop Crif Dog, plays a huge part:

It just so happens that someone stole our phone about a week ago. After three years of having this really lame white intercom phone, I bought this awesome 1970's rotary phone for the booth. Last week, some drunk guy ripped the phone and cord out of the receiver. I had an old black rotary phone at home, so I donated the phone and cord to the bar. The black/orange phone actually looks really cool, but it's really disheartening how people steal stuff from bars and restaurants. We also had a really cool brass plaque in the bathroom that said something like "no cocaine peddling" that got ripped off. I wish I could have a word with those people...

So do we. So do we.
Want to submit your theft stories? Send to tips@eater.com.
· All Previous Editions of Shit People Steal [~ENY~]
[photo credit]