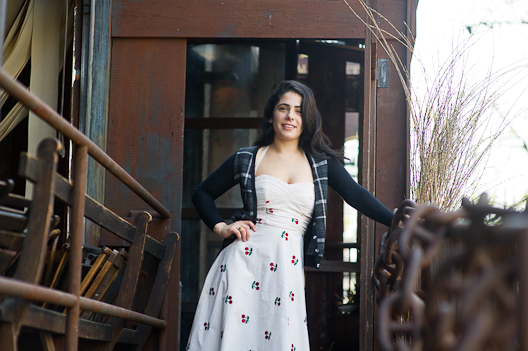 Edi & the Wolf has attracted a lot of buzz in the five months it's been open. The Avenue C spot serves solid Austrian food and has a stellar wine list, but there's also something about the vibe of the space that's totally charming — it just looks and feels unlike any other restaurant in NYC. If you go on a busy night, Jenna Bess Maceroni will be the one at the door. If you're lucky, she might give you a zebra feather.

It's 8 PM on a Saturday night. What's the wait for a table? If it's busy, the wait is usually from 45 minutes to an hour and a half. I wouldn't really refer to it as a wait though, because as soon as you come in here, we bring you to the bar, set you up with the bartender, get you a glass of wine or beer and appetizers if you're interested. It's all about the experience, every step of it. You're not waiting out in the cold, you're not on the corner, you're not uncomfortable. We keep you updated.

Is there anything I can say to make my wait shorter? How about gifts or cash to speed things along? Everyone's treated equally and we don't accept cash in the sense of getting a table. If you insist, we'll take it and throw it in the tip jar, but it's not going to get you a table any faster.

Tell us about your favorite customers. One of my favorite customers is this gentleman named Harry, he's this awesome Greek guy — glasses, kind of nerdy, works for IBM, seems to know everything about anything, awesome to talk to. He lives outside of the city, and he'll just come in here and I'll talk to him about everything. We have a lot of regulars that we really love, but he just stands out. Do you get any celebrities? We often do, but we choose not to talk about it, for obvious reasons. I will say that I was a huge *NSYNC fan and we did have a member of *NSYNC come in. It wasn't Justin Timberlake, but it still blew my mind. Little things like that are the best.

How do you deal with VIPs when there are no tables left to give? If it's really busy and a VIP walks in here, obviously they know that it's going to be hard to get a table. I mean, we'll bring them up to the bar, get them a glass of wine and some appetizers, and just be honest about how long it will take for them to be seated. That's all we can do. I'm not going to lie to them about the time, but I'm going to check in with them and be honest.

What's the most outrageous request from a customer that you could accommodate? It was this women's birthday, and she wanted one of the feathers that was hanging above her table. There were only seven of them left. It's actually a zebra feather, they're really rare, but we gave it to her. ...that you couldn't accommodate? We actually had a gentleman that really wanted a toothpick one night. We had just opened and for some reason we didn't have a toothpick for him. It was pouring rain out, and I went to three different convenience stores to try and find a toothpick. I was unsuccessful at it, I came in drenched in rain, and he was grateful that I had tried, but I did not accommodate him.

What's the best time to come to Edi & the Wolf? I'd come on the weekends, but every day is a great day. When I come in here, even just to work, the atmosphere is so personal, it's so beautiful, it's so relaxing, the music is always really smooth and good, and that's what I want people to expect here, and I stand by that.

Where do you like to eat when you're not at Edi & the Wolf? I eat at a lot of different places, but one place I often find myself at is Lil' Frankies. I have a lot of friends that work there, and I'm always treated the way I want to be treated.