Welcome to the Ask the Ambassador, in which Eater meets with different ambassadors to the UN to discuss their eating and drinking preferences and where they can get a taste of home while they serve their mission in New York City. 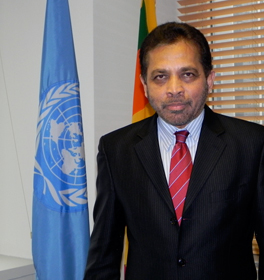 Recently, Eater sat down with the Ambassador of Sri Lanka in his Midtown office to discuss food. Dr. Palitha T. B. Kohona has had an impressive career in international politics—he is currently Co-Chair of the UN Ad-Hoc Working Group on Marine Resources beyond National Jurisdiction, in addition to his title of Permanent Representative to the UN. But in addition to his achievements, he also loves to explore the New York dining scene and embrace its wonderful diversity. He said, "That's what New Yorkers do, they eat." See below, where Dr. Kohona tells us all about his favorite restaurants, and a bit about his cooking style.

Have you been able to find traditional and good Sri Lankan food in New York City? There are not that many places. Only two in New York City, but there are quite a few in Staten Island. I wish there were more. Sri Lankan food is distinctive. It's a common misconception that Indian and Sri Lankan food are similar. That's like saying all the food of Europe is similar. The range of food in India is vast and because Sri Lanka is an island nation, it has a distinctive and readily identifiable cuisine of its own. I feel if there were more Sri Lankan restaurants in Manhattan they would do well because people here love to go out to eat.

Where do you go in Staten Island: In Staten Island, some of the Sri Lankan places include Ruwana La, Lakbojun, and Sunrasa. I have dined at those three in recent times but there are quite a few others. They have a character of their own. Sri Lankans are well known for their hospitality and these restaurants demonstrate clearly not only the distinctiveness of the cuisine but the hospitality as well. The two in Manhattan are Banana Leaf and Sigiri. I regularly go to those. I actually order in from them at times too.

What are some of your favorite dishes? I have a preference for Aappa and Indi Aappa. Aappa is a crepe made with rice flour. Indi aappa is a noodle like preparation, also from rice flour. These dishes are quintessentially Sri Lankan, which you can eat with a spicy, eye-watering fresh coconut sambo and lunumiris or with a mild curry. These are popular breakfast dishes in Sri Lanka. Sri Lankan fish curry is also very distinct. The traditional dry fish curry ambul thiyal has a unique sour flavor.

Is it comparable to what you can get at home? What you get in Sri Lanka is unique, but they do a good job here. The secret to aappa is to get the edges crispy, and it's always a challenge to a chef not in Sri Lanka, perhaps due to lack of ingredients or other requirements.

What do you like to eat around the UN and your embassy? Around here the range of options is so great it's almost impossible to say. There's Greek, Spanish, American, Vietnamese, Japanese, Thai, Chinese, Fusion, Mexican... I tend to patronize all depending on my preference. Right in front of the Sri Lankan Mission is the well known seafood restaurant Dock's, and on either side there's an Asian fusion place Zengo and a Mexican restaurant Siniqual. There's also traditional food like Smith & Wollensky's, well known for steaks and two Indian restaurants, Bukhara and Amma. The Turkish restaurant Ali Baba. And of course my favorite French restaurant, Le Bateau Ivre! The choices are really mind boggling. I've eaten at all of these places over the last few months! Of course ambassadors don't spend all their time just eating and drinking!

What do you crave that New York City just doesn't have? After a while you tend to miss aappa and the Sri Lankan fish curry: the white fish curry with sauce or the dry curry without sauce. With aappa it's a subtle thing that attracts me to it. For children it's a favorite. New York misses the texture and crispiness. Not always—accidentally someone may get it right.

Also the beef curry or the black pork curry. And the combinations of spices Sri Lankans use: cinnamon, nutmeg, cumin, curry, gamboge, rampe, lemongrass... Many Sri Lankan dishes contain coconut and that adds a sweetness to almost every dish, and there's a constant contrast to the heat provided by chillies. You have to remember Sri Lanka has been historically renowned for the spices they produce. Romans, Greeks, Arabs and Persians all visited Sri Lanka in the in historical times to trade cinnamon, nutmeg, cloves and peppers. Sri Lanka produces the best cinnamon in the world today.

What New York City restaurant do you miss when you go back home? It's not in my neighborhood, it's in the Meatpacking District: Spice Market. The chef there has successfully introduced the flavors of the east to New York in a New York setting. I take visitors there all the time. Of course there are fabulous French restaurants. I love Jean Georges, Le Cirque, Le Perigord. I also love Megu at the Trump World Tower.

What's your favorite comfort food to eat in New York? I'm actually not a big comfort food eater. Occasionally I'll pick up a sandwich from a deli, especially when I'm in a hurry. I generally like a sandwich with tuna, just from anywhere. Of course I cook at home. I love cooking and I experiment a lot with different kinds of dishes.

Tell me a bit more about the cuisine of Sri Lanka, what are some of the ingredients regularly used? Of course the main ingredient in any Sri Lankan dish is rice. Sri Lankans also eat a considerable amount of vegetarian food. It is almost essential to have something green on the plate. We mix fish and meats too. There are no strong phobias so we eat almost everything. Coconut is used extensively in almost every dish, with a preference for fresh coconut. We have a distinctive Sri Lankan dish called coconut sambo, made from grated fresh coconut. There are also regional variations of dishes in Sri Lanka; the highlanders have dishes different from the Northerners and Southerners and there are distinct Dutch and Portuguese influences in some dishes, especially in desserts. Our Christmas cake came from Portugal, but now has Sri Lankan characteristics, including the addition of Sri Lankan fruits and Sri Lankan alcohol, Aarrak.

What's your favorite expense account restaurant? Megu, Jean Georges, I used to love Tabla when they were open. Le Cirque, Le Bernardin, L'Absinthe... Oh, and it's not exactly expensive but I love Rosa Mexicano for Mexican. I'm sure I missed out on a lot of good places but there's only so much time. I love Balthazar in Soho too.

What's your favorite cheap eat? Ali Babba is not too expensive. It's a nice place for that.

Do you like pizza? I don't love it, but I have been known to eat pizza and sometimes go looking for it. New York is full of great pizza.

Are there any American specialties you've grown to love? I think my most favorite American specialty is a steak. A clean steak at places like Smith & Wollensky's, The Palm, and Peter Luger's.
—Jackie Goldstein