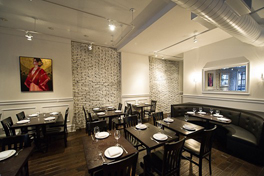 No matter how many times we’ve all read some variation of the “Acclaimed Pastry Chef Opens Mexican Restaurant” headline it still feels risky, even to read. But if chef and owner Alex Stupak was worried about risk he would have never left the world of sweets for savories. Let alone left it to make tacos.

Here he is, though, at Empellon in the former Chow space dishing tongue tacos to an invariably thick crowd. It seems that his assumption—that there really isn’t the sort of expectation with Mexican food that might come along with, say, Italian food, French food, or even Spanish food—was right on the mark. After all, Mexican food is notorious for being the city’s culinary Achilles heel, and perhaps without even being conscious of it, we’re all more open to let someone—anyone—try their luck at improving ours.

But Stupak doesn’t want to stop at tacos. He’s enlisted Natalie Tapken, Beverage Director for Burger and Barrel and Lure—to carry his spirit of risk over to the wine.

“I wanted her to take a very anarchic approach to the list,” says Stupak. “I feel that many Mexican restaurants focus on New World wines particularly from Latin America, but in my opinion Argentina or Chile are no more Mexican than France or Italy.”

That’s assuming the Mexican restaurants Stupak is referring to even have a wine list to begin with. We’re all familiar with the Malbec baking above the bar and the suspect sangria that’s been marinating much too long. But Tapken and Stupak decided to take what is an unfamiliar match in the mind of the diner and offer them a real opportunity to experiment.

The result is a short, value-driven list with smart selections and a balance of New and Old World that will be familiar to those who are familiar with Tapken’s work over at Burger and Barrel. What's unique about the list here is not only its unlikely attachment to a Mexican restaurant, but the fact that it was born out of a true collaboration between Tapken and Stupak.

“It was so interesting tasting with Alex because he has this totally different vocabulary that he uses to describe wine,” says Tapken.

According to Tapken he talks about wine as if it were food (or at least inseparable from it) which had a way of constantly bringing her back to the menu—a process, she says, that sommeliers can often get a bit detached from when deep into writing a wine list.

This partnership between the two has bred a list that is well thought out and adventurous in context. Whether or not they’ll be able to tip the balance from tequila or beer to wine at Empellon is another thing, but the effort and opportunity to experiment feels right at home.

Bang for Your Buck
Treixadura, Domillor, 2009, Ribeiro, $45
A Treixadura-based blend that is easily one of the prettiest examples of this grape variety. The wine finds a delicate balance of high acid, intense aromatics, and a creamy mouthfeel, which makes it a reliable choice with a variety of Stupak’s creations.

Malvasia, Bermejo, 2009, Canary Islands, $50
The Canary Islands—Spain’s archipelago off the coast of northern Africa—can trace their winemaking history back to the 15th century, but have only recently regained a presence in the international market. The island vines are planted in sci-fi craters in black volcanic ash to protect the vines from apocalyptic winds. The Malvasia is perhaps the most transparent of the Bermejo wines

COS “Rami” $60
One of our favorite producers out of Siciliy. All of their wines are beyond progressive for the region, and this blend of 50/50 Grecanico and Insolia is surprisingly jaunty for such a warm climate. Pure stainless steel-only production.

Pinot Noir, Soter “North Valley,” 2009, Oregon, $60
Though famed Napa Valley winemaker Tony Soter’s Oregon winery has become well known for its sparkling wines here in New York, his Pinots are certainly worth equal attention. The North Valley is a newer project from Soter for which he sources fruit from various growers across the Northern Willamette Valley. Bright polished fruit with a little bit of Willamette grit around the edges.

Off The Beaten Track
Saint Laurent, Weingut J Reinisch, 2008, Burgenland, $50
St. Laurent has spent the last year or so in heavy rotation. This highly aromatic import—hailing from the same family as Pinot Noir and tasting like the love child of that and Syrah—is one of Austria’s most unique red varieties. Versatile, fruit-forward.

Crowd Pleaser
Sylvaner, Domaine Ostertag, 2009, Alsace, $49
Sylvaner, despite its long history in Alsace, is often tucked away and ignored in favor of more popular varieties like Riesling, Gewurztraminer, and Pinot Gris. Ostertag’s old vines bottling is a great introduction to the many charms (not least among them, affordability) of Sylvaner.

Under $40
Muscat, Bonny Doon “Ca’del Solo,” 2009, Soledad, $35
The neo-shaman that is Randall Graham has descended on CA’s last frontiers with a European inspired ideology and a penchant for organic and biodynamic farming. The Ca del Solo vineyard in Monterey County has been farmed biodynamically for nearly 10 years and yields some of Bonny Doon’s great value-driven whites. Classic, highly aromatic Muscat with plenty of acid and a very California fruit density.

Break The Bank
Riesling, Nikolaihof, 1999, Wachau, $145
Stubborn, uncompromising brutes in their youth, Nikolaihof’s biodynamic offspring deserve time. This ‘99 is drinking right at the beginning of its window now. Waxy, intense, and mineral-driven.

WTF
The “Bold & Velvety” section leans almost exclusively on Napa and Mendoza, and while this isn’t a shock, it would be great to see a little more variety. Perhaps a few beefy selections from the Old World would be a welcome addition.
· Previous Editions of Decanted [~ENY~]