Eater's kicking off early today to enjoy the sun. Check back tomorrow for a Memorial Weekend guide, and enjoy the holiday. 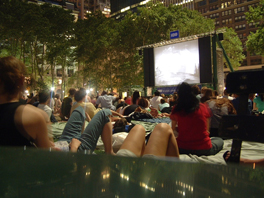 PARK SLOPE— Here's Park Slope reports that chef Mark Simmons, a chef from New Zealand who appeared on Top Chef season 4 and has worked at Public, Get Fresh, and Melt, is opening a restaurant focusing on New Zealand cuisine at 847 Union Street. It will be called Kiwiana. [HPS]

WILLIAMSBURG— Williamsburg's Dressler is planning an oyster party with Island Creek Cooperative and Harpoon Brewery on Saturday, June 11 from 1 - 3:30 PM. $35 gets guests a dozen oysters and a flight of craft beer. [EaterWire]

BRYANT PARK— Drinking is now officially permitted during the screening of outdoor movies at Bryant Park. 'wichcraft will be allowed to sell wine and beer and park-goers can bring in their own, as they've already been doing, unofficially, for years. [DNA Info]

GRILLING, PT 2—Because there's really nothing like a summer barbecue (and beer) to bring out the idiot in everyone, Eater National brings together the best barbecue disaster videos on YouTube. [-EN-]