This weekend is the official kick-off to summer in New York City, which means three months of fun, sun, and visiting out-of-towners who might want to check out some of the city's big tourist trap restaurants. There's no need to subject yourself and your loved ones to a meal at an overpriced, overcrowded, or gimmicky eatery. So, here's a list of five alternatives that should please everyone in the group. 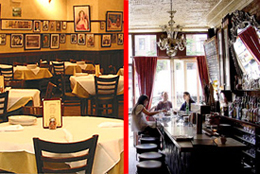 5) Carmine's/Frank: Tourists love Carmine's in Midtown because they can get fishbowl martinis and decent (but pricey) red sauce fare in an airplane hanger-sized room that's filled with cartoony Italian ephemera — portraits of Nona, chandeliers with fake flickering candles, pictures of "the old country," etc. And it's always a total zoo in there — like the Olive Garden, on 'roids. But, if your guests want some pasta and big ass meatballs in a somewhat kitschy room, head to Frank in the East Village. The food is moderately priced and consistently good, and the aesthetic is more Donnie Brasco than Tony & Tina's Wedding. You'll have to wait for a table, but you'd do that in Times Square, anyway. [Photo; Photo] 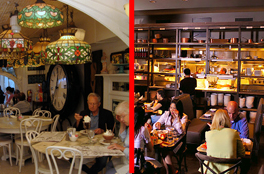 4) Serendipity 3/DBGB: No self-respecting New Yorker should ever step foot inside of Serendipity 3. So, if your out-of-town guests are seduced by its gimmicky siren song, steer them downtown to DBGB. There's no goofy Tiffany glass or five-foot-wide clocks at Daniel Boulud's Bowery hot spot, but if they want tricked-out burgers and hot dogs, and bonkers ice cream sundaes, they won't be disappointed, and there are plenty of more refined French dishes to satisfy the gourmands in the group. The prices are comparable, and both menus feature a bunch of dishes with silly names. [Photo, Photo] 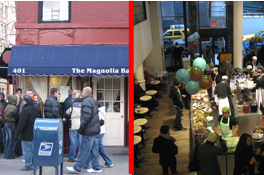 3) Magnolia Bakery/City Bakery: Sex and the City has been off the air for a good seven years now, but its constant re-runs on basic cable and two blockbuster film spin-offs have given birth to a whole new generation of fans who want to live the exciting life of a sassy, thirty-something advice columnist, and her frisky fashionista friends. And no SATC die-hard can visit NYC without requesting a trip to Magnolia, which, even after a massive expansion tear, is still a total clusterf*ck at all locations, at most hours of the day. So, if your guests have a craving for something sweet and fabulous!, persuade them to go to City Bakery, instead. There's no cupcakes, but there are plenty of novelty desserts (famous hot chocolates, monster cookies, "Save The Polar Bear Claws"), and they also have good savory foods too (mac and cheese). If you go before or just after the lunch rush, you won't have to wait long either, and there are also plenty of places to sit. [Photo; Photo] 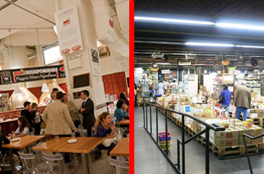 2) Eataly/Buon Italia: Make no mistake: New Yorkers love Eataly. But out-of-towners love it ten times more. This summer, more tourists will probably visit Mario Batali's Italian mega-store than Epcot Center, Mt. Rushmore and the Corn Palace in Mitchell, South Dakota, combined. It can be a real nightmare navigating that place when it's busy. So, if your guests want to shop for some imported Italian goods, and grab some fine prepared foods, Buon Italia is a solid alternative. It's rarely overcrowded, the people that work there are friendly, and the guys at the deli counter/kitchen in the back know their prosciuttos. It's also located inside of the Chelsea Market and directly next to The High Line — two places that tourists like, and New Yorkers think are fun in small doses. [Photo,Photo] 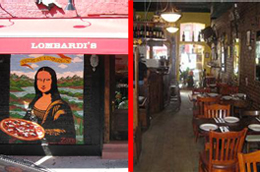 1) Lombardi's/Luzzo's: Lombardi's is a very old pizzeria that make some okay pies, but make no mistake: it is a tourist trap. There are lines constantly, the menu features many dishes that are way overpriced, and there's a painting on the side of the building of Mona Lisa holding a pepperoni pizza (always a dead giveaway). Grimaldi's, John's and Arturo's might have better food, but they are also perpetually slammed. So, for an old-timey feel and a solid pie without the hassle, head to Luzzo's in the East Village. They use a coal/wood-fired combo oven, and although the pizza is a mix of Neapolitan and Roman styles, it's sure to impress. The servers are also exceedingly friendly, and most nights, you can just walk right in and sit down. [Photo, Photo]