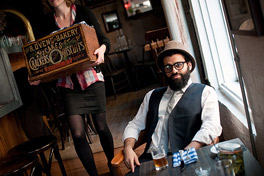 Up now on Shit People Steal, Gabriel Stulman, who has a habit of outfitting his West Village restaurants with knickknacks and tempting antiques. And he has some bathrooms that may prove irresistible to klepto diners—they're stocked with Altoids, tampons, tissues, and lotions. Take it away Gabe:

Everything in that bathroom at Joseph Leonard has been stolen. The best is we have a letter written by Roland Bartels (the grandfather of Brian Bartels - my friend, former bartender at Joseph Leonard, current GM and partner at Fedora). It is a great essay on why he likes to write. It is introspective and beautiful. The best part is we have a sticker on the frame that says "Copies Available at the Bar" because so many people have asked for copies. Yet none-the-less we have had it stolen (frame and all) on multiple occasions. It is ridiculous.