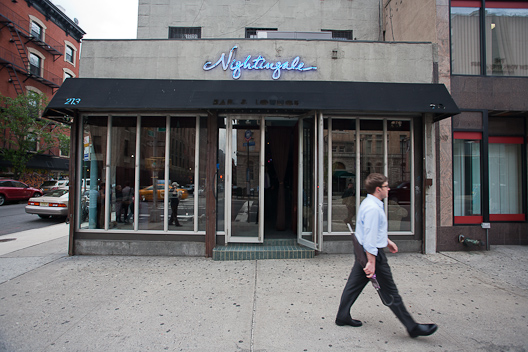 "Are you open?" That was the frequent question for Nightingale, a painfully faux-swank watering hole in the East Village, one recent night. Not a good question for a bar right in the thick of one of New York's great nightlife neighborhoods. There had apparently been a band earlier, with the attendant crowds. But they had cleared out at an unconscionably early hour, and taken whatever fans they had with them. Now there was just me, the bartender and the bad lighting. 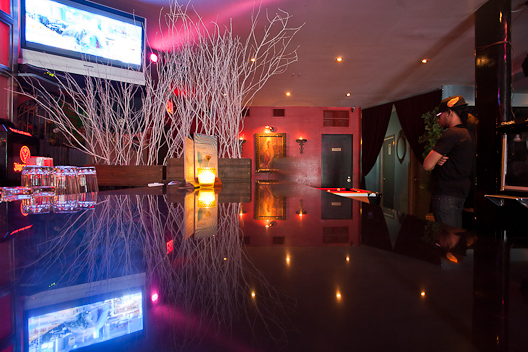 If I had walked into Nightingale 15 years ago, an empty room would not have been a problem. It was a legendary—and wonderful—dive back then. You expect dives to be empty some of the time. The name was Nightingale Bar; weren't no "lounge" about it. The derelict beer hall was known as a band mecca. Those were the days when New York could still foster an underground music scene. Blues Traveler and the Spin Doctors got started on its tiny stage. The old juke box was filled with records by local artists. I remember using its bathroom once. It was filthy. Ah, youth.

Sometime around 11 years ago, the owners either sold it, or decided it needed a ritzy makeover. So, whadda we got now? Well, let's let the bar's website describe it. "This sexy and intimate, yet spacious venue is where people come to celebrate, while enjoying the music and ambiance. Illuminated by tranquil hues through a glass paned wall is a black granite bar. On either sides of the bar are large plasma screens. Across from the bar are banquettes filled with throw pillows and surrounding plush sofas."

Yes, throw pillows. And swivel chairs. A fake fireplace and a real mirrored ball. And illuminated squares of purple, aqua and red. Vases full of those decorative white branches you can buy at the corner deli. A Jägermeister dispenser, of course, and a pool table and popcorn machine. And, over in the corner, a velvet cordon. No need for that tonight. The bartender, making work for herself, dusted off the bottles one by one. Lots of flavored Bacardi, Grey Goose, Stoli and Absolut. Coming through the speakers was an unending loop of dance songs—empowered women singing sassily about their destructive sexual relationships. No sign of "Little Miss Can't Be Wrong."
—Robert Simonson