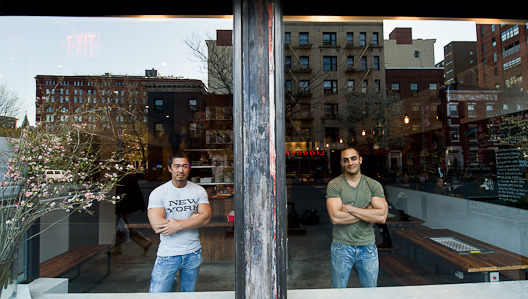 Last April, first time restaurateurs Takashi Inoue and Saheem Ali opened their small Japanese spot Takashi in the West Village. The restaurant serves yakiniku, an offal-heavy style of grill-your-own-barbecue that's hard to find in New York. Despite a quiet opening, diners were eager to try the food from the start, and the crowds have kept coming, thanks in part to a sparkling review from Sam Sifton that was published last June. We recently chatted with Inoue and Ali about the first year of Takashi, and their plans for the future.

How did this project come together? Saheem Ali, general manager and co-owner: Well, we're partners. We've been together for four years now — when we met I had just finished my masters at Columbia in theater directing, and Takashi had just moved to New York. Takashi Inoue, chef and co-owner: I was a chef in Japan, but I always cooked traditional Japanese food, no barbecue. SA: And I had never worked in a restaurant, at all.

Did you always want to do a yakiniku restaurant? SA: Initially he wanted to do a different kind of cooking, but then one morning Takashi woke up and was like "I have it. It's going to be yakiniku." TI: My grandma had the same kind of restaurant in Osaka. So, this is like my soul food. You know, a lot of the recipes come from her. I knew this was going to be good when I found a great beef supplier at Japanese Premium Beef. SA: We also met Jake at Dickson's Farmstand Meats and Pat LaFrieda, so those are the three that we go to the most. As we were building out, we were doing the research on where to get the meat, because Takashi knew that it was going to have to be very specific. TI: Especially offals, they need to be really fresh. But yeah, we started with so many people, but they didn't have the parts. SA: And we discovered that because of the stringent rules with the USDA, a lot of the slaughterhouses weren't allowed to give those parts to any restaurants or anything. So, Takashi actually made some calls to Japan to find out places in Japan that were getting offal from here.

How was the build? SA: The build was really exciting. Takashi always wanted to have a counter in the center of the room, where you get to see the preparation — we're not hiding anything, it's coming from a place where you can see it. One of the most fascinating things for us at the beginning was figuring out a way to soften the idea of what we're serving, because a lot of Americans aren't familiar with the innards. So, Takashi had this brilliant idea of doing this blackboard, to explain the different parts, and we used cartoons because of the Japanese influence, and also to make it more whimsical, to kind of blunt the edges for people that weren't familiar with the different cuts. So, we had an artist come in from Osaka to do the drawing, but the words and the ideas and the expressions are all his.

How was the opening? TI: I don't even remember, because I was so, so nervous. SA: We did a soft opening, we invited friends and associates the first weekend. So we did two days of just that, because I had never been a waiter or a bar back, or anything, and I was trying to figure out how to train waiters to be waiters, just from intuition. We had Saturday and Sunday, we were closed on Monday, and then we just opened the door.

Did people come? TI: Yeah! SA: They did. We were lucky, because Urban Daddy did a write-up on us before we even opened. They just kind of walked in and pretended to be people who were interested in the space, and then all of a sudden there was something online.

How did people react to the style of service? TI: This style is not unique. When you go to Koreatown, you can get something similar, but I don't think you can get the variety of the dishes that we offer, anywhere. SA: And something that we've found is that when people come in and they're not adventurous, they're okay having just the skirt steak or the ribeye, and then the ones that do want to try something different will say "give me something and don't tell me what it is until I've eaten it." People tend to be pretty adventurous when they come. TI: Once they eat it, they love it.

You got a great review from Sam Sifton after two months. What was that like? SA: We didn't know it was happening, completely. We didn't know what Sam Sifton looked like. TI: I didn't know what a New York Times review was. SA: We didn't know how significant it would be. All of a sudden, they called and said "We're taking pictures tomorrow." So we scrambled, we got everything ready, and then the review came out and things really took off. Before that, we had a lot of Japanese customers, because Takashi had a blog, in Japanese, for Japanese people living in New York. And the neighborhood people found out because they were around, but the Times kind opened us up to a whole school of people who had maybe never even been to Koreatown. So for them, it was a whole new experience, and they've been coming back. It seemed like Sifton got what this place was all about. SA: He did, yeah, yeah. We were ecstatic. He took the time to describe the love and the care that goes into every dish — it's all very specific. So, just to read someone who doesn't have a Japanese background get it, that was really heartening. And, it's funny — a lot of people that came in after that ordered exactly what he described, to the letter.

Six months in, what had changed? SA: Most of what we changed was behind-the-scenes in terms of the logistics of it. We found six months into it, we were just kind of trimming, because we had gone in with more staff than we needed, so we found that we could pull back a little bit and keep running. But in terms of what we're serving, it's been exactly the same.

What are your priorities right now? TI: Because the dishes are so simple, quality is key. SA: Consistency of service and consistency of taste is really important, so we want people to keep coming back a year, two years later, and it will taste just as good as it did the first time they came here.

Has the family tried Takashi? TI: Yeah, yeah, they came for the opening. How does it compare to grandma's place? TI: This is better. SA: They actually said that, yeah. Grandma hasn't made a trip yet, but they reported back and they said that he's doing better.