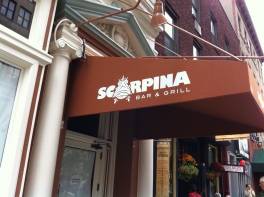 On today's edition of Adventures in Shilling, there are some fishy reviews of Scarpina, Tap Room No 307, Columbus Tavern, Eats and G-50 Bar & Grill:

An Eater reader offered a tip to the shilling-hotline after browsing reviews for Scarpina on Yelp. They noticed a certain "Nancy L."'s review was a bit too positive, and then upon clicking on the profile, they found she'd written three 5-star reviews for Nino's, Nino's Positano, and Scarpina (all owned by the same person Nino Selimaj)! There were also only two other reviews, which were random. On Nino's Nancy L. writes:

I had the fillet mignon, which was as good as, if not better than, I've ever had it anywhere, and I eat a lot of steak! Someone else had the swordfish, which was also excellent. Pre-theatre menu comes with mashed potatoes and creamed spinach for the table, which were both super creamy and tasty (though probably terrible for us). Had the creme brulee and mango/lemon sorbets for dessert, which were both pretty good. Also, we had the nicest waiter I've ever had at a restaurant, and the hostesses were really nice too. Excellent dinner!

In a sea of 1-star Yelp reviews regarding Taproom No 307 (some of which have the words "blech" and "joke") there is a suspicious sounding 5-star review mixed in:

I went here for a late dinner on 3/16/11, Tap Room's opening night. The proprietor met us at the door when I asked to look at a menu, was very welcoming, and invited us in for a round of beer on the house. When I asked the bar tender (who was a very friendly Scotsman) what was on tap, he said, "well, we have 42 on tap tonight." Whoa. So I got up, checked out the chalk board, asked him for some advice, had a taste of a view, and then over the course of the night tried a few different Pilsners. I sat at the bar and also ordered dinner... Each was delicious. I was most impressed at the speed of the food coming out (especially on opening night) and that the chef came out to introduce himself and ask how things were.

Another reader writes in about Columbus Tavern's Yelp and Menupages reviews. Yelp's are basically all awful, however on Menupages, the first many are positive and then when you click to the second and third pages, they're bad just like Yelp's. Peculiar:

Will become a new regular for sure I read online this had changed hands and opened as Columbus Tavern and wanted to stop in. I am a sucker for a great, rambling bar...long, dark wood, and a nice vibe. Top that with a really great wine list (The Oregon Pinot Gris from King Estate at $11 a glass is a fantastic value)...well, I am sold. Our bartender was amazing, the place was FULL of both families in booths (eating some pretty scrumptious looking burgers) and dates, and singles. Perfect mix. Love it. WILL be back.

The burger was succulent, savory, and delicious thanks in part to the quality of the beef, an injection of fat (which adds to the juiciness), and the carmelized onion topping. Truly rivals any burger in town, from the Corner Bistro to the Shake Shack. The oyster shooter was awesome. Had to stop myself from ordering more. I could have had them all night but there were so many other things I wanted to try off the menu. The waiter made a heavy push for me and my friend to try the oysters with creamed leeks. I'm a pushover so I conceded. They were off the hook. The service was terrific, very friendly and casual. If you live below 14th st, Eats is definitely worth the excursion uptown.

A shill in this eater piece regarding the name change hoo-ha with Gotham Bar & Grill/G-50 Bar & Grill:

I ate at G 50 previously known as Gotham 50 and had the sliders and sausage meatballs as a appetizer. Best sliders i have has hands down. For the main dish i had the eggplant parmigiana which was excellent and to top it off I had the homemade twice baked cheescake. They should box it and sell it cause I would take a whole pie home. Congrats to G 50 definitely will be going back asap and everyone should try this great food. Gotham should welcome the association of such great food.