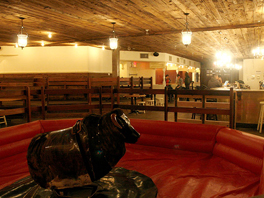 The folks at Dell'Anmia weren't the only ones to face down Community Board 3. Here, some highlights from the meeting, that went well past midnight:

1) Not a Bookstore LLC: The "kids" behind Not a Bookstore LLC were back in the hopes to bring their salon concept to the old Superdive space. Last month, they were shooed away because they didn't do enough (any) outreach. This time around, they came armed with around 200 signatures, and we also got a few more details on the concept. As a reminder, they're envisioning a gallery/restaurant/artist's residency with a garden where they will grow herbs for the kitchen. We now learn there is a tea sommelier on board - and the teas will be created from the herbs in the garden, the menu will be influenced by Mediterranean home cooking, and the art in the gallery will be art which "educates." Sounds nice! Or not. The troubled history of 200 Avenue A continues to haunt the committee. They voted to deny the project because although it sounds nice, they were weary of the fact that they claim to be a gallery and restaurant yet they are applying for 2AM weeknight and 4AM weekend closing times and a license for a DJ and live music. There is also over saturation in the area with 19 licenses within 500 feet. Basically committee just seems untrustworthy of anyone who wants to be involved in this god forsaken space on Avenue A.

2) 133 Essex: You also may remember from last month when Matt Levine was booed during his presentation for 133 Essex Street, the former home of Mason Dixon. Well he was back last night for his new dining concept, and this time things went much better. He had met with the neighbors and developed some stipulations, mainly concerning security, crowding, and implementing a cute report card system where the restaurant would get monthly grades from the neighbors. He also plans to cut down the size of the bar and increase the size of the kitchen (it's really trying to be a restaurant). One sticking point was the hours: Levine really wanted 4AM on weekends, but after some pushing and prodding a 2AM close on weekdays, 4 AM on weekends was agreed upon. He was awarded a deny unless he agreed to the stipulations. One fun moment during this applicant's session included a committee member grilling Levine on the menu. The cuisine is influenced by the many cultures that make up the Lower East Side, specifically mentioned in the application were German, Jewish, Irish, Italian... he asked where the Latinos were, the audience seemed to like that.

3) Evir Corp: Evir Corp, the group behind San Marzano on the Lower East Side, is planning to open something very similar on 117 Second Avenue. They were given approval for their wine and beer application with a deny unless they agree to basic stipulations.

4) A Casa Fox: A Casa Fox was given the okay for their upgrade to a full license, and they were also given the go ahead for a sidewalk cafe.

5) In other outdoor dining news: Peels and 26 Seats are also getting some al fresco dining just in time for summer. Peels' sidewalk cafe will be particularly large with an additional 46 seats outside.
—Jackie Goldstein
· All Community Board Coverage [~ENY~]