Share All sharing options for: The 10 Strangest Design Details at New NYC Restaurants

If you take a look at all of the restaurants that opened in New York in 2011, you’ll see a lot of bold, weird dining rooms. But ten design details in particular stand out as the strangest of the bunch. Here they are: 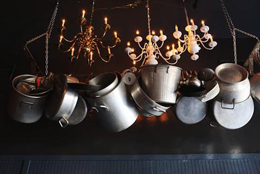 10) The Pots and Pans Chandelier at Bowery Beef: Before it opened, the team behind this new roast beef sandwich joint promised it would have "enormous chandeliers," and they did not disappoint. It's taking the "restaurant supply store" theme first displayed a DBGB to a whole new level. [Photo] 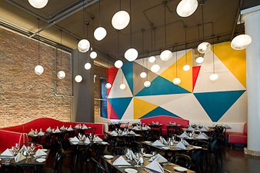 9) The Triangle Mural at Gravy: The dining room of this new Flatiron southern restaurant is studded with many retro details, like chairs and lamps that look straight out of Mad Men. And then there's this thing, which looks like the lovechild of a coodie catcher and the cover of the latest Strokes record. [Photo] 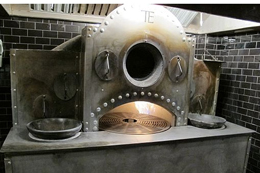 8) Ember Room's TE Oven: Todd English will probably sell a smaller version of this oven on the Home Shopping Network sometime soon (the man is a TV merchandise-selling machine). Maybe it will come with a recipe for his daughter's cupcakes? [Photo] 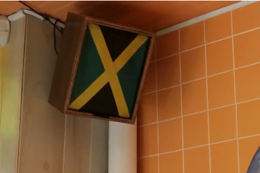 7) Jamaican Flag Speaker at Miss Lily's Favourite Cakes: A sly way to remind guests that they're in a Jamaican jerk hut. [Photo] 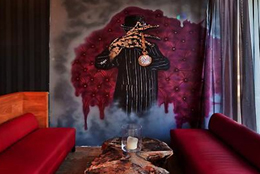 6) "The Bandit" Painting at The Trilby: Nobody knows the back story of this mysterious man, but we think he's either A) A time-traveling warlock B) A friendly ghoul with a penchant for fine Savile-Row suits C) A Cherry-Poppin' Zombie. 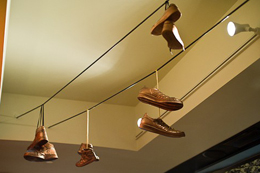 5) The Golden Shoes on a Wire at APL: This new LES restaurant found unlikely design inspiration in 1978 musical flop The Wiz. [Photo] 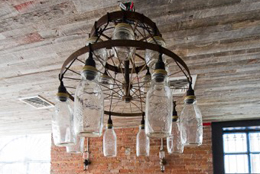 4) The Chandelier at Rucola: Easily one of the most elaborate mason jar chandeliers in New York. Much more bad-ass than the one at Donatella. A masterpiece of steam punk restaurant design. [Photo] 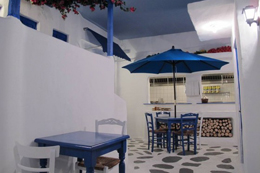 3) The Dining Room at Souvlaki GR: As soon as you step foot in this new Lower East Side restaurant you're instantly whisked away to the romantic Greek isle of Santorini. The painted cobblestones really complete the picture. [Photo] 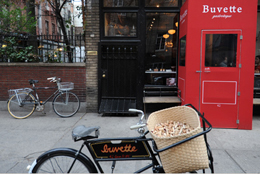 2) Buvette's Bicycle with a Basket Full of Wine Corks: We're not sure if this is permanently parked out in front of Jody Williams's new Italian/French place or if they just brought it out of the shed for the NYT photo shoot, but we've never seen anything like it. They better get a good lock for that thing, or Yoko Ono will steal it and add it to her Dada art collection along with "shoe stuffed with ostrich feathers" and "lightbulb made of corn." [Photo] 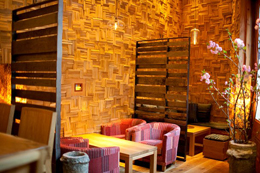 1) The Wall of Books at Brushstroke: We wonder if those books are actually full of all the recipes that David Bouley tested out over the last ten years. [Photo]