Leo and Oliver of Dos Toros Share Their Dream Journals

Welcome to Eater Dream Journal, where we ask chefs and restaurateurs to write down their dreams for a week and share them with us. Today, Leo and Oliver Kremer, the brothers behind runaway hit taqueria Dos Toros. 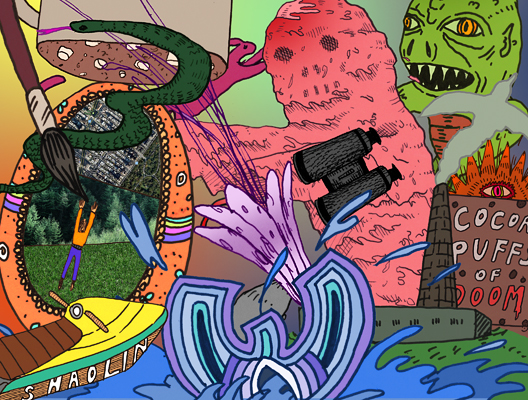 Night 1: I'm some kind of warrior fighting these super evil looking monsters as I am making my way to the Cocoa Puffs factory. I finally get to the factory and am informed that Cocoa Puffs are being discontinued. This is really bad news. I also notice that the factory is overrun by wild animals.

Night 2: I'm moving very quickly through this enormous landscape, kind of flying/floating. I pass through a forested area, then a grassy field, then through an urban setting. I realize that this whole world I've been moving through is enclosed within an even more giant kind of hallway or hangar. I then see some friends of mine who are working on making rocks, and painting blades of grass, and it dawns on me that the entire world I've been flying through has been painstakingly handmade.

Night 3: I think I'm in Florida, near the Epcot Center. I'm hanging out with the Wu Tang Clan, who have generously decided to make me an honorary shaolin. We drive to a party, but they are terrible drivers, and we end up careening into a big river. All of a sudden we're on jet skis, having a very nice time cruising around.

Night 1: Skiing at a Lake Tahoe resort, I think Squaw Valley. Icy conditions on the mountain led my friends and I to hit the cabin earlier than planned for hot cocoa drinking.

Night 3: Playing beach soccer in what feels like a world cup game, and playing horribly. Basically felt like running in quicksand. Did manage to score a great goal, but ultimately we lost.

Night 4: Nightmare. Being attacked and harassed by some aggressors. They look vaguely like some kids that went to a rival high school. Try to fight back but don’t have enough team support and unable. End up trying to run and fleeing to safety.