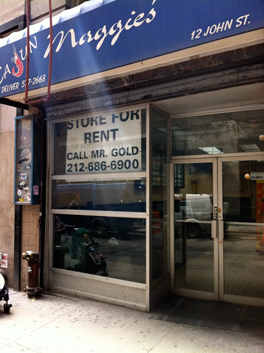 1) Astoria: Lost City learns that the St. Honore Patisserie, a 66 year-old French bakery on Ditmars Boulevard in Astoria, Queens, closed. He explains: "The bakery was an anomaly in the largely Greek and Italian neighborhood. It was bought by Alex Reyad in 2008. It was known for its macaroons, baguettes and apple tart." [LC]

2) Midtown: Midtown Lunch learns that Kolette’s Kitchen on Lexington between 55th and 56th Streets closed after the Passover holiday and across the street a location of Hello Pasta is also dunzo. [ML]

3) Financial District: Per the tipline: "Cajun Maggie's lost their lease on John Street... A rather popular place among some office workers. They closed last week." [ShutterWire]

4) Upper West Side: Another tipster reports that Taberna, an almost year-old tapas place on Amsterdam and 81st Street, is now closed. [ShutterWire]