Junoon's Wine List Proves It Can Take The Heat 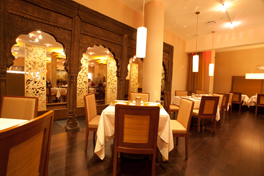 Perhaps more than any other cuisine, Indian food is notorious for being difficult to pair with wine. And faced with the wine lists at most of New York’s Indian restaurants, it’s almost always a Kingfisher kind of night. But Master Sommelier Scott Carney—current Beverage Director at Junoon, and former owner of Park Slope’s deceased Bussaco—has fashioned a brainy wine list that proves that tikka and tandoori can actually play nice with a variety of wines.

The list is built around Carney’s belief that a divergent Eastern and Western palate for food and wine does exist. In a general sense, his understanding is that Easterners tend to prefer wines that amplify the pungency and spice of the food, whereas those from the West are looking for wines that soften that left hook that Indian food invariably delivers. He’s found that leaner, more mineral driven wines from grapes like Sauvignon Blanc and Assyrtiko tend to turn up the volume on the white side, and for reds, the fire-on-fire fear (of pairing high alcohol wines with spicy food) is barely a concern for the Eastern palate. Argentinean Malbec and Aussie Shiraz have been planted for those not afraid to fan the flames.

For the New Yorkers seeking flame retardant wines, those with more viscosity like Marsanne and Roussanne from the Rhone, or anything with a little residual sugar, tend to soothe rather than exaggerate.

For those who’d rather walk through a glass wall than deal in these sorts of details, just drink Champagne. This is a rule of thumb that will almost never betray you, but may likely betray your wallet. Luckily, there are six sparkling wines under $75 that will work as stand-ins for the pricey selection of Champagne.

Outside of this cerebral approach to food and wine matching, Carney seems to embrace the freedom inherent in applying a Western relationship between food and wine to a cuisine that didn’t grow up with it. Indian food—by nature of its reputation as the gauntlet of food and wine pairing, and its unfamiliarity among American diners—breeds, by default, a sense of openness and adventure; he enables this potential spontaneity by offering more stylistic variation than he did at his last restaurant.

The pricing here ranges from fair to generous in some places and there’s a nice collection of half bottles toward the back that make it possible to test out that East v. West palate theory. All in all it’s a great midsize list assembled by a guy who’s been in the business for quite some time and seems to really just be having a little fun.

Bang For Your Buck
2007 Cava L’Hereu de Nit Rosé Raventos i Blanc Penedès, $50
Raventos is arguably Spain’s greatest Cava producer and the only Cava producer to estate grow and bottle all of their wines. The Rose, a traditional blend of Macabeo, Xarello, and Monastrell, is one of the best values in sparkling wine.

2007 Mayacamas Sauvignon Blanc Napa Valley $65
Easily one of the best domestic Sauvignon Blancs. Sourced from some of Napa’s highest altitude vineyards and reared by one of California’s most legendary producers. A small production cult find that is practically endangered out east.

2007 Nerello Mascalese Etna Rosso Terre Nere Sicily $50
The entry-level bottling from this excellent producer on Sicily’s Mt. Etna. The current vintage is 2009, so it’s nice to see this here with a little time in bottle still priced as if it were the current release. Great opportunity to taste the wine when its edges aren’t quite so rough.

2006 Xinomavro Karydas Naoussa $57
Xinomavro is one of Greece’s most interesting indigenous varieties. Often dubbed the nebbiolo of Greece and not without reason. A definably Old World wine: earthy and complex with high acid and formidable structure. Here with a few years in bottle it’s guaranteed to drink above its price point.

2006 Ribera del Duero Tinto Pesquera Fernandez $65
One of the most recognizable names in Ribera del Duero, Alejandro Fernandez’s Pesquera is a perennial go to for big Ribera that still maintains elegance and a sense of place. The 2006s are very drinkable across the board and the pricing here is very fair.

2008 Zweigelt Nittnaus Burgenland $40
One of the most exciting producers of red wines out of Austria, Hans and Anita Nittnaus have been able to coax a distinctiveness from their wines that’s not often found at this price point. All farming is conducted according to biodynamic principles and there’s minimal intervention in the cellar. Classic spicy, fruit-driven Zweigelt.

Under $40
2009 Moschofilero Skouras Peleponnese $39
After studying oenology in Dijon (one of the first Greek winemakers to do so), George Skouras returned to Greece to establish what would become one of Greece’s first modern artisan wineries, in 1986, and it remains one of Greece’s finest producers to this day. This is an excellent introduction to the pink-skinned, floral Moschofilero grape.

2000 Rioja Reserva Ardanza La Rioja Alta Rioja $35 (375ml)
A solid price on a halfsie that will drink very well now from one of the benchmark producers of traditional Rioja.

WTF?
Champagne is skewed toward bigger names and high prices, a few more value-driven selections from smaller producers around $100 would be a welcome addition.
[photo credit]