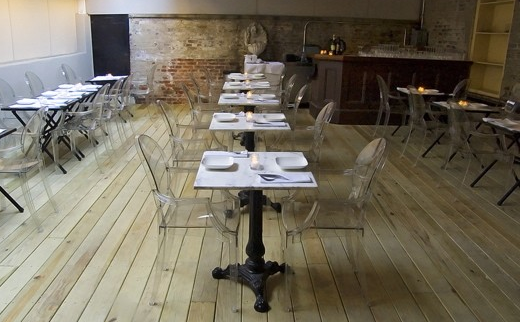 Community Board 2 met last night for their first of two SLA Licensing Committees this month. With a fairly long and fairly controversial docket, the meeting went on forever. Luckily for all, The Dutch is down the block from the meeting site and they were still serving their late night menu after it was over. Let's take a look into the future of the neighborhood. Here is a recount of what went down.

1) Misoya: Bobby Munekata, who owns a small ramen and yakitori empire (this is the restaurateur behind Totto Ramen, Yakitori Totto and several others), was present in hopes to obtain a wine and beer license for his newest ramen spot, Misoya at 163 Elizabeth Street. A few people spoke out against the project, one of them, when addressing the saturation of the area, said "As I predicted in 1975, the whole ground floor of New York is restaurants." Is that supposed to be a bad thing? Unfortunately, due to a lack of community outreach, over-saturation in the area and the fact that this was a previously unlicensed location, the committee voted to deny. Perhaps they will have better luck in front of the full board.

2) Kyo: Chef Marc Forgione and his partner were back to try again for their Southeast Asian-inspired concept in the old Elizabeth space at 265 Elizabeth Street. Last time they laid over to do more outreach and figure some things out. Over the past month they had two meetings with the community where they made some adjustments, and reached agreements about issues like how to control noise. However, it later turned out only about six people came to the meetings. Both meetings combined.

It was puzzling because it seemed like they really made efforts to reach out too. One of the other major issues with this space is the garden. Nearly half the restaurant's seating will be in this garden, which has a retractable roof. There were many issues regarding the garden, and the legality of the garden that didn't sit well with the committee and in the end, they voted to deny the applicant because of those issues.

3) Balaboosta: Mulberry Street charmer Balaboosta currently has a license for wine and beer, and they were on last night's docket in the hopes of upgrading to a full liquor license. The committee of course grilled the lawyer who was there to represent the applicant on whether those benches outside of Balaboosta are there legally or not. CB2 is very concerned about benches! They also asked if there was any outreach regarding the upgrade to a full license, to which the lawyer replied, yes, there has been a sign up for the past two weeks. Some customers signed a petition too. However, one noted that the customers were of course going to sign a petition supporting the restaurant, the restaurant needs to reach out to the community. They denied the application mainly due to the lack of outreach. Better luck next time.

4) Dacha: A new restaurant is coming to 541 LaGuardia Place. Dacha, which means "cozy house" in Russian (or maybe just "house" according to other online translations) will feature Russian cuisine and VODKA because they were awarded with a deny unless they agreed to certain basic stipulations. This space used to house Thai restaurant Rhong Tiam previously. Also, exciting news: Dacha will be very affordable. The most expensive entree clocks in at around $18.
—Jackie Goldstein
· All Community Board Coverage [~ENY~]