Share All sharing options for: The Westway Finally Wins Approval After Umpteenth Try 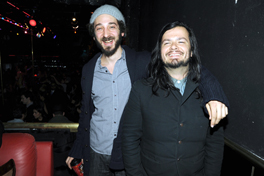 Last night was the first of two SLA Licensing Committee meetings this month for Community Board 2, and it was rather tame. Still, it did include the historic and long awaited approval of controversial West Village club Westway:

1) Westway, a new club trying to come to 75 Clarkson Street from the team behind The Smile, was heard last night for the umpteenth time. This basically turned into a discussion on traffic congestion. To give some history, Westway appeared in the past at a licensing committee and appeared before the SLA once, but the SLA sent them back to the Community Board because of a change in their method of operation (mainly they were originally planning to have an adult entertainment element - topless dancers on poles - but they nixed it due to an outcry from the community) and they wanted to hear about their community outreach.

They came back almost overly prepared for the meeting: they had results of studies about traffic in the area and brought a traffic engineer to discuss the traffic issues live. Additionally, they had over 200 signatures in support and around 15 letters of recommendation from cultural institutions throughout the city. The owners had also sat down with elected officials to come up with multiple stipulations in regards to traffic and security. Some of these stipulations include: keeping consultants on hand to make sure all traffic issues are cool and doing monthly traffic studies/updates, many security guards, putting in a request to the DOT for a No Standing sign, no promoters, no bottle service, no flashy signs, no sidewalk cafe...they seem to really just want to be there and are willing to work with the community to make everyone happy.

Only a few people spoke in opposition to the project, they of course talked mainly about traffic. One spoke about the fact that the space still has stripper poles, so he doubts they will actually nix the topless dancers; but they owners insisted it was because they were obsessive about aesthetic and wanted the club to have an 80s nightlife vibe. Many others spoke on their behalf, one man basically compared the two owners to the likes of Edith Wharton and Bob Dylan, New York's finest.

In the end, the board voted to deny unless certain stipulations were met, including the ones listed above, because it is so clear they don't want to cause problems and are willing to work with the community. Also there was a good amount of community outreach and little opposition at this meeting. Cheers to the new Westway!

3) The Gaslight was approved for booze outside, and you can also now get your wine and beer on at The Tea Set. Just in time for spring! No real controversies here.

4) The Anchor on 310 Spring Street was slapped with a deny unless for their renewal. They need to do a little better with the community, but they immediately agreed to post a sign to respect neighbors and get a cigarette receptacle, so things are already improving.
—Jackie Goldstein
· All Community Board Coverage [~ENY~]