The Stories Behind Five Pieces of New Restaurant Art

Share All sharing options for: The Stories Behind Five Pieces of New Restaurant Art

Many of the city's hot new restaurants feature original paintings or unique prints on the walls. These are more than just decorations, they usually tell a story about the chefs and restaurateurs. Here's a look at five pieces of art that are up in buzzy new places around town, with artist info, and how they work within the context of each project. 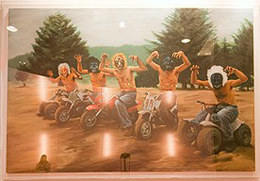 5) Bad Route at Ma Peche: We knew that the painting in David Chang and Tien Ho's Midtown restaurant was featured in The Royal Tenenbaums, but it turns out the artwork itself has a strange backstory too: Mexican artist Miguel Calderon had a group of models pose on motorcycles with the masks, then he took a photo and handed it over to a portrait artist to make the actual painting. When filmmaker Wes Anderson saw Bad Route, he thought he might incorporate a similar bike-riding stunt into the film, but he ended up using the piece as set dressing. Although David Chang and Co. have never explained why they chose it for Ma Peche, it works A) with the colors of the room, and B) with the overall theme of the restaurant. Ma Peche was, after all, a big Momofuku team effort that rolled up and took Midtown by surprise. [photo]
4) Lola at Graffit: As a nod to his past as both a graffiti and fine artist, Spanish chef Jesús Núñez asked Chilean muralist DASIC to create a few large works on the walls of his new UWS tapas restaurant. There's an impressive mural of a bullfighter in the main dining room, and also a long gold painting of a woman's head behind the bar, called Lola. Here's a video of DASIC doing his thing with the spray cans before Graffit opened:

For more of DASIC's work around the city (including street art), check out his blog. 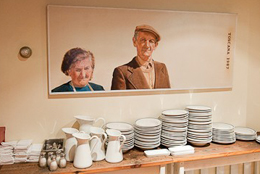 3) 'Tuscan Grandparents' at Porsena: The main dining room at Sara Jenkins's cool new Italian restaurant features a portrait of the chef's 'adopted' Tuscan grandparents. Jenkins says of the couple: "They owned the house next to ours in Italy, they were farmers and from the first summer we spent there they adopted us into their family." The artist, Michael Cleverly, is an old friend of Sara's dad, and works out of Woody Creek, Colorado. The painting is a touchtone to old-world Italy, done with a bit of modern finesse, which is really what the food and vibe at Porsena are all about. [photo] 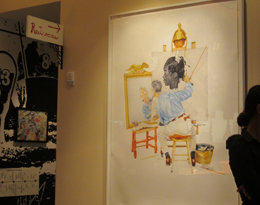 2) Self-Portrait of Norman Rockwell as Ruby Bridges at Red Rooster: Marcus Samuelsson tapped a lot of great local artists for Red Rooster, including Harlem-based Philip Maysles, a painter and the co-director of the nearby Maysles Institute. A print of one of Philip's most famous works hangs on the wall, right near the bathroom. It's a riff on the self-portrait of Norman Rockwell. Here, the Americana artist is depicted painting himself as Ruby Bridges, the first African-American student to attend an all-white school. It's sly details like this that make Red Rooster more than just a buzzy dining room with great fried yard bird — it's a restaurant that celebrates diversity, and highlights the best of the neighborhood and its personalities. [photo] 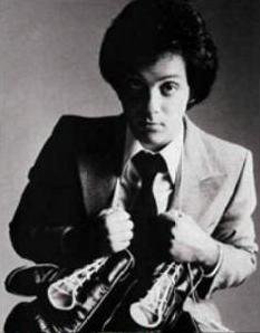 1) Billy Joel Print at Torrisi Italian Specialties: Although Rich Torrisi and Mario Carbone have never explained why they picked this print for the restaurant (it's from the dust jacket of Billy Joel's 1977 hit record The Stranger), we have a few theories. The food and the vibe at Torrisi are, in many ways, a throwback to the old-school Little Italy that The Bard of Long Island sings about on this disc ("Bottle of red, of bottle white..."). But the photo also shows Billy with boxing gloves around his neck, a reference to his teenage days as a welterweight fighter. Like the Piano Man, Rich and Mario toiled long and hard before their big break — as chefs, they worked in some of the toughest kitchens in town before stepping out on their own. And although their food may be as smooth as a top 40 hit, it's informed by everything they learned coming up in NYC. Just a theory, but it's great that they chose this photo for the restaurant, instead of some of Joel's other album covers. [Photo]