The Law of Unintended Consequences: An Economic Analysis

Share All sharing options for: The Law of Unintended Consequences: An Economic Analysis

On the House is Eater's column that goes behind the scenes of the restaurant business, written by the owners, operators, chefs and others who make our favorite establishments tick. Today, Christophe Hill, co-owner of Northern Spy Food Co. in the East Village, deals with the some very unglamorous restaurant world realities.

Everything that follows is probably self-evident navel-gazing to the 98% of you out there who are smart enough to keep your relationship to restaurants on the level of amateur quality-control inspector. 1.9% of you may be in the trade and are experienced or deep-pocketed enough not to suffer these blunders. So this is for the 0.1% of readers who may benefit.

Fall 2009: We’d hoped to open Northern Spy in six months via guerrilla tactics and a low-budget build-out, and we’re losing sleep every night now that the process has stretched to 10 months. The monthly rent check goes out accompanied by the sound of a toilet flush. The m.o. is now “screw it, open fast, worry later,” so we don’t put adequate attention into the mass of plumbing residing directly overhead of the 150 square feet comprising the hot kitchen and dishwashing area. We’d heard that there were regular problems in our building with leaks in the restaurant space from “above.” Nevertheless, we just tidy up the existing plumbing (most of it isn’t ours), close up the ceiling with clean drywall and a coat of tasteful grey paint, and Northern Spy opens for business on November 10, 2009. Cost of ceiling work: about $1500 out of our total contracting tab.

2010: With exhausting regularity, water from the aforementioned ceiling drips onto the dishwashing station, weekday mornings especially, though also during brunch service on weekends. The landlord addresses this problem with diligence if not intelligence or thoroughness. The problem never goes away during the first 15 months of operations. Cost of aggravation: immeasurable, but technically $0. 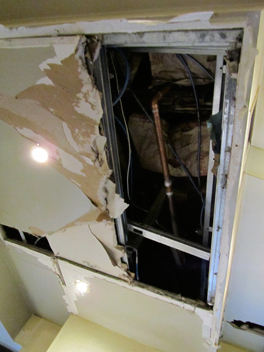 January 23, 2011: Tonight is our post-holiday staff party at Spin (excellent ping-pong, great staff, food?meh). We host our regular Sunday brunch service but shut down for dinner. We have a great time at Spin. Some of you may recall that night: the temperature dropped to 6° Fahrenheit. The fact that we closed at 5 PM on such a hellaciously cold night, allowing the kitchen to cool down for much longer than normal, however, may have been the butterfly wing in our restaurant chaos theory. (In retrospect, we should have held the staff party on the night of the Super Bowl, one of our slowest nights in recent memory; I never would’ve guessed that the East Village cared so much for that hoary tradition.) Cost of party: $2000.

January 24: I get a call in the early hours from the opening staff that the water isn’t running...confusingly, not everywhere, but in enough places to sound like trouble. I intuit that we have a frozen pipe somewhere and spend the day trying to figure out where it is and thaw it. The air outside is so cold that I realize how porous our restaurant space is: frigid air getting sucked in from mysterious, heretofore- innocuous cracks in the old building’s structure, pulled in by the negative pressure created by our underwhelming, return-air-deficient hood exhaust. We stumble through a very quiet lunch with no water running to the bathroom sink (sketchy?) and only cold water to the dishwasher (ditto?). Mid-afternoon a formerly frozen water pipe in the kitchen ceiling finally thaws and ruptures, creating a deluge before we shut off the emergency valve. We get the building’s plumbers on-site with miraculous speed, and they repair the rupture in question (a ¼” long crack in the elbow of a cold water pipe leading to the hot water heater, hence the lack of hot water). But still no water in the bathroom sink and none forthcoming. We decide at 5:30 to shut down for the night since we really can’t tell customers, “Hey, don’t worry about washing your hands, we aren’t!” I stay until the bathroom pipe thaws out around 8 PM. Except for the huge ugly hole in our kitchen ceiling, everything is all right: water is restored and nothing is leaking. Cost of closing for the evening: about $3600 in lost revenue.

January 31: We shut down for the whole day to repair our kitchen ceiling, which is a buzz-kill to look at. Our contractor Greg does what we should have done prior to opening: thoroughly insulate the space around the ceiling plumbing and block off all points of entry from the outside. When I’d poked my head up into that space on the 24th, the day of the deep freeze – in a hot kitchen with weak exhaust, a double-deck pizza oven, and a ten-burner stove, mind you – I could see my breath, such was the inadequacy of the insulation. He also installs a drip-pan to redirect any future building leaks to a drain and closes the ceiling up with drop panels so we can easily poke our heads up there in emergencies instead of tearing ugly holes in our drywall. Cost of closing: about $4000 in lost revenue. Cost of repairs: about $1000.

Late February: For no good reason except woeful rookie shame, I barely think to file a claim with our insurance carrier. After much number crunching and somewhat brutal honesty, but with relatively little fuss, they cut us two checks: one for about $500 (repairs minus deductible) and one for $1900 (lost revenue minus expenses not incurred by closing). We accept them gratefully.

Analysis: Staff party: $2000 spent on the wrong night. Out-of-pocket expenses: $1000 to get it right the second time. Lost revenue: $7600 that looks like hell on the January P&L. Reimbursements: $2400, small comfort. Personal experience gained: overrated.
—Christophe Hille
· On The House [~ENY~]