All throughout Burger Week, we're going to be chatting with the men who make New York's favorite burgers. Right Now: Jamie Schweid 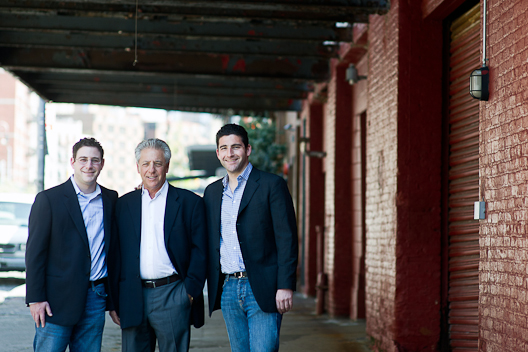 Jamie Schweid along with his brother Brad and his father David run Burger Maker, what he calls an industrial sized mom 'n' pop that was founded on Gansevoort Street over 35 years ago and eventually moved out to New Jersey to a larger facility. Unlike some of the other meat purveyors we've been interviewing, the Schweids only sell burgers, and they sell about 4 million of them a week to clients as big as Sysco and as small as Blue 9 Burger. It's time to talk burger fads, Bobby Flay, and the best.

So who do you supply burger meat to? Jamie Schweid: There are too many to name, but we do Bobby's Burger Palace, Five Guys on the West and East coasts, Fudrucker's, Fat Burger, Five Napkin Burger, Blue 9 Burger, Brother Jimmy's, and so and on.

Lately it seems every restaurant in New York is touting a proprietary burger blend. What's the story there? This whole blend phenomenon has really only come into play recently. My dad started the company in the Meatpacking District 35 years ago, and we really stuck to making four or five different styles of burgers in terms of blend type. What’s evolved over the last five years has been these different blends where we'll do prime, we'll do a sirloin blend, we'll do chuck and brisket blends. I've been doing this about ten years and when we first started you just had one or two customers who requested blends. The whole short rib thing, by the way, is a scam. It's not really short rib. When you get a legitimate short rib at a restaurant, it's really gooey and juicy. Well there's something called chuck flap that separates the chuck from the rib, and technically you can call that short rib. And that's what a lot of these guys will put in their so-called "short rib" blends. So you stick to more standard mixes? It's all about the customer and driven by what they want. We've developed some special blends—hangar and steak tail for instance. But you really should base your burger of 50 - 75 percent chuck because that's the most flavorful and has the best texture for ground beef and we’ll mix in other items—hanger brisket, things of that nature.

You do tastings? Yes, everyone laughs at me because work for me is going to a customer and eating hamburgers. Sometimes I have to go into meat detox situation. Today we were testing some new product we were working on, and when we were on this trip [out West] and we'd have beef for lunch, prime rib for dinner.

So what's in Bobby Flay's burger? All I can tell you is they use certified Angus beef. They’re very diligent in what they do. The one thing I appreciate about them is it’s all about quality. It’s all about the eating experience. They aren’t into the whole blend thing, which personally I find to be a bit overrated.

You think it’s a fad? Yes and it’s perpetuated by the ability of a purveyor to lock in a customer. They'll go to a customer and say oh I can make you a blend that nobody else can make you and it's proprietary. But in actuality, they're not creating something that hasn't been out there for years. Hey you give me a 100% boneless chuck burger and it’s pretty hard to beat that. I’m not recreating the world here in burgers. I take a really good raw material—that's something we don't ever compromise—and I grind it up and serve it to my customers.

Do people every request the Bobby’s burgers? All the time. The best is people who come in all the time and say, "Oh I want the Five Guys burger." I say, "Why don’t I give you a great burger that’s just as good as their burger?" Don’t you want to create an identity for yourself? And it's a pretty common occurrence I assume. That’s the biggest problem in this, not even burger world but restaurant world. If your first inclination is to copy someone else, then you’re not going to be successful. That’s why the uniqueness of New York is so wonderful. In NYC they come to me and say let’s create a point of difference.

With burgers, what percentage is the material and what percentage is the chef? I’d say it’s 60/40 in the chef's favor. I can prepare a great burger, but if the bun’s not right, or if they don’t cook it properly, if it’s too charred on the outside and rare in the middle, if the combination of cheese and condiments doesn’t work well, it’s the chef. I can introduce a good quality product, but it’s what they do with it that makes it spectacular.

What’s your favorite burger in New York? I can say my favorite burger that I don't make. In New York, I’m a JG Melon guy. I like Melon and Clarke’s. I like the bun. I think the meat is not overwhelming. I find that you have to be simplistic in the burger world if you want a repeatable experience. You can’t go to Minetta Tavern every night. It’s so overwhelming. One of the things I like to talk to my customers about is whether they want a burger that someone will eat once a month or once a week. At Blue 9 we can’t make an aggressive blend because it’s too heavy.

Any bad burger experiences? Here’s the bad burger experience. Actually it was at a burger cutting. When you put aged steak trimmings in a burger, you’re very hit or miss in terms of your flavor profile...the age of the meat dictates the flavor of the meat. So I had an aged burger that I got sick from. With aged steak trimmings, there's so much bacteria in it that there’s a tangy taste to it. Those type burgers are very hit or miss. They’re either phenomenal or they’re vile. It gets back to the whole complicating the burger issue. Everybody wants to be the next best burger blend but what’s best for the chefs of the world is to think about what’s best for their restaurant and their environment.

What’s the best mix for a home cook? 80 percent chuck with 20 percent sirloin. What about ideal fat to lean ratio? The home consumer walks into a supermarket and they’ll go lean. But you need anywhere from 75 - 80 percent fat. If you don't, you’re not getting that flavor. But what’s mostly served retail is lean meat. It's because the average consumer shopping is a mother who makes her decisions based on health. We sell Fresh Direct to a retail customer and it’s a thing we look out for.

Best burger cheese: American. Condiments? I’m huge into sauteed onions and avocado relish, not avocado, but avocado relish. I’m very about the burger and the bun, I’m huge into potato rolls, maybe you could throw a smidge of butter on there and put it on the grill for a second. But it’s all about the soft, I’m not a ciabatta guy.

Size: I’m a 6 - 8 oz guy. anything bigger is overwhelming. I find larger burgers are too difficult to cook correctly. When you make these big balls of meat it’s such an exact science. They end up all done on the outside and the inside’s rare. And I don’t like smashed burgers. Like Shake Shack? Yeah. Like my dad says growing up, don’t smash the burger or you’ll lose all the juice.

Where do you stand on veggie burgers: There are no good veggie burgers. I’m not the right person to ask on that. I wouldn’t go out and eat a veggie burger, but we tried to develop one like 15 years ago and you just can’t get the right flavor profile. You need something to bind the burger and it just ends up bad. That’s why so many fall apart.

Grass v. Grain: Grass fed is terrible. The marbling comes from the grain. You don’t have the flavor in grass fed. The corn that they eat provides the fat and that’s where they base the flavor. All cattle are grass fed to til 150 days and that’s when they switch to grain.

And what about the safety issues the burger industry has faced of late? We test every raw material that comes into our building. We have a full time lab in place. We’re on the forefront of safety because of who we sell—Sysco for example. Everything we buy is fresh beef, 5 - 7 days old. We don’t use byproducts. You’re one recall away from damaging your reputation. and you don’t wish it upon any of you competitors, because it’s not good for business.
· All Burger Week Coverage [~ENY~]