All throughout Burger Week, we're going to be chatting with the men who make New York's favorite burgers. Today: Pat LaFrieda and Mark Pastore. 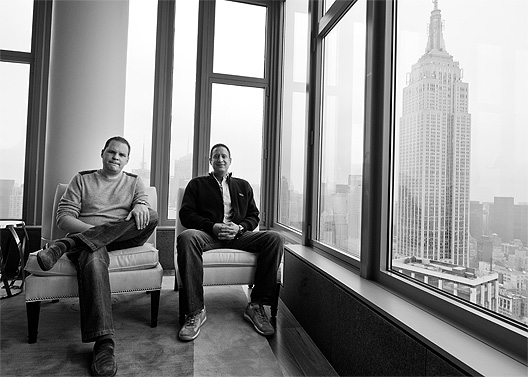 Pat LaFrieda and his cousin Mark Pastore (along with dad Pat Sr.) are the masterminds behind LaFrieda Meat Purveyors, a third generation family owned meat purveyor that was founded in the Meatpacking District 90 years ago. Now relocated to a large facility in North Bergen, NJ, LaFrieda provides meats to hundreds of New York restaurants and can now be found in Cleveland, Philadelphia, and elsewhere. They also have some pretty serious name-brand burgers. Time to talk blends, corn v. grass, and the beauty of eating raw burger meat.

Let's talk blends. Why does practically every restaurant has a proprietary blend on its menu? Pat La Frieda: The blend thing all began for us with, believe it or not, Henry Meer from City Hall Restaurant on Duane Street. He was asking for some different flavors, high fat content, he wanted something that wasn't going to break apart as much on the grill. So that's when we first tweaked the original La Frieda blend that we had been selling for decades. Before him, there was only just one type of chopped beef that we produced. Mark Pastore: And it was just good chopped beef. It was never shit, we didn't want to give shit. Butchers would always take the trimmings of whatever meat they were butchering and would make their burgers from that. Instead of grinding what's left—the trimmings—we use the whole muscle. PL: And every meat company that made ground beef made it one way. So if it was a guy who trimmed top rounds of beef, he made it with top round trimmings. And that would give them a flavor profile and that's all they made. If you didn't like one meat company's blend, you would have to get someone else's.

So then it was Shake Shack? When the original woman who first ran Shake Shack said she wanted something unique, that's when I started making those blends for them six or seven years ago. I just kept on tweaking it until we had the Shake Shack blend. Then they took off and all these restaurants started asking for their own blends. MP: Was Spotted Pig before or after? PL: After but it just so happens I think April was sincere. She wasn't chasing after anyone's idea. When she first came over here she was so tough. She got what she wanted, and what she wanted was a leaner burger...MP: Real beefy. PL: Yeah, with a lot of real heavy beef flavor. It's because she uses that blue cheese...MP: Roquefort. PL: She needed the beef to keep up with that, so that's how we came up with her shortrib blend, because there's nothing beefier than that. And then the blends took off. Which blend do/did others request the most? MP: So many people call and say they want Shake Shack PL: People would call up and ask Mark for the Shake Shack burger. We promised them we wouldn't give it away, and we promised April we wouldn't give hers away. And then it was unstoppable, we made blend after blend after blend all the way up to Eater Burger Week.

Are there any blends left to make? Haven't you made them all at this point? MP: There are really now 25 - 30 distinct blends and there are an infinite number of deviations made from those blends. But I think we're done making main blends.

And how did the Black Label come about? MP: This was really a experiment with me and Pat to see if we could make the superblend, a really high end burger, and after a lot of testing we finally nailed it. We offered it to so many different people —at least five major players—before we met with Riad [Nasr] and Lee [Hanson]. At the time we didn't even know what Minetta Tavern was going to be and we weren't that familiar with the chefs, but when they said they wanted to focus on great steaks and great burgers, we knew this was it. We were all skeptical, and it fucking blew up. They came back and asked us to only offer it to them, and we said yes, but the truth is, it wouldn't be as good anywhere else.

How much of a burger's success depends on the burger meat and how much on the chef? MP: Well normally, I would say 60/40 burger to chef. But the Black Label blend is so volatile. We'll grill some up and it won't taste the same, and it is what it is because Riad experimented with it. Other burgers are more idiot proof.

What's the ideal burger blend for you? PL: Meat to fat? I think it's...if I say 77/23 is that too particular? MP: I like 70/30 because it's rich. But I like any type of burger, I like them all. PL: I like burgers so rare. When I do my test, it comes out 76, 77, or 78. MP:: Michael Bloomberg started buying chopped beef from us, because he likes to make hamburgers at home, and we fought with him because he wanted 100 percent chuck with an 80/20 meat to fat ratio. And I'm thinking to myself, of all the things on his plate to do, he's going to decide to be the burger maker? He wanted it called the Bloomberg mix. And so we'd have to grind chuck, and I remember Pat used to call the order in and he'd be cursing about it. What's wrong with 80/20 chuck? MP: Nothing. For years Americans and butchers, 40, 50 , 60 years only ate chuck. Because it was cheap, and it was what everyone knew. PL: What happened in over the last 30 years, burgers became more and more popular, and in the last seven years came the rise of the artisanal burger. Back then, it was penny for penny and it was a price issue. Now it's more about quality. If you're spending 30 cents more a pound, who cares? It's about 20 percent more to make it our way, because when you only use trimmings it's cheap. But now that's what people want.

Does anyone else use whole muscle? MP: No. Well you see some copy cats. PL: What other meat producers do is they take all their trimmings in "combo bins" and they take these big bins lined with plastic and roll them into a dumping machine and the dumping machine just grinds it and over-grinds it. We still make everything in real small batches. And it's labor intensive. MP: The truth of the matter is there is no easier way, and he curses every night. PL: In the real foodie towns, there's a demand to pay a couple cents more for something of higher quality. How do you keep up with demand? MP: Work more hours. The only thing that's expanded is our payroll and the hours we work. PL: Mark's there during the day, I'm there at night. It's like restaurants that we all frequent. If the main chef's not there, the food's going to be off.

Favorite NYC Burger: MP: What are you in the mood for? You can't put a Little Owl burger and a Black Label burger and a Shake Shack burger and a Spotted Pig burger in the same category. A Spotted Pig burger is a meal. A Shake Shack burger is good anytime, and it's an on-the-go burger because it's a four ounce patty versus and eight ounce patty. PL: If I want an awesome burger while being entertained I'll go to Burger & Barrel, because Josh will do backflips. I even like Schnipper's.

Where do you stand on grain versus grassfed meat: PL: Grain all the way. MP: Absolutely. PL: All of our black Angus farms have their cows eat grass and forage for 18 - 19 months and then they're finished on two months of grain. The really need the grain for the flavor. MP: We do offer 100 percent grass fed beef, because there's a demand for it, but in terms of taste, there has to be grain in there. PL: I eat a lot of meat raw. It's how I can taste the flavor in the meat. And when I taste grassfed, there's a bitterness to it. MP: At the end of the day we're meat suppliers. Also the thing is nine out of 10 of those farms that say they grass feed the animal will just not tell you that they were grain finished.

Burger Pro Tip: PL: People should get meat they trust, using whole muscle, not trimmings, and eat their burgers as rare as possible. Do not overcook a burger because you're afraid of E. Coli. I love that more people are even grinding meat at home. Even more reason to have a rare burger. Sear it on high heat with a low cooking time.
· All Burger Week Coverage [~ENY~]