Share All sharing options for: Marc Sarrazin and George Faison of DeBragga

All throughout Burger Week, we're going to be chatting with the men who make New York's favorite burgers. Today: Marc Sarrazin and George Faison. 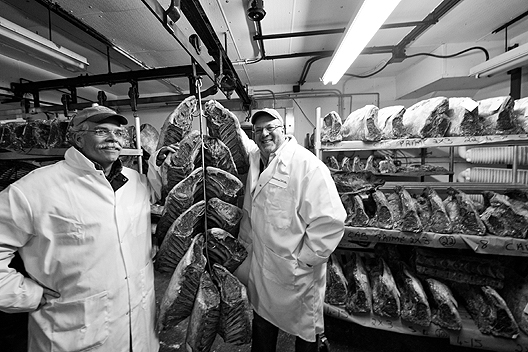 Marc Sarrazin and George Faison are the co-owners of DeBragga, a meat purveyor that sells a lot of ground beef to many of the city's most popular restaurants, including Colicchio & Sons and DBGB. Marc has been working at the company's Meatpacking District facility for most of his adult life, and George came to DeBragga from D'Artagnan, a luxury goods purveyor that he founded in the 1980s. Neither of them eat very much ground beef, but they sure know a lot about burgers.

What restaurants do you sell the most burger meat to? George Faison, partner & chief operating officer: Can't reveal that. Nope, won't do it bud. Too much competition out there. You should know better than to ask. Are you kidding? Mark Pastore would be on that in two seconds, as soon as he read your article. We're interviewing him for this feature, too. And if he's willing to say, I'll jump on it in two seconds. We're not going to reveal clients like that. Marc Sarrazin, partner and president: We sell a lot of ground beef to Jones Wood Foundry. It's a very cool place, very cool vibe, it's a nice Upper East Side pub. It's a great place to go and have a beer with your friends. We also do a ton of ground beef for the Restaurant Associates restaurants.

How many pounds of ground beef do you sell a week? MS: I think we're selling about 500-600 pounds of wagyu ground beef a week, American-raised, local, USA product. We're selling probably 200-300 pounds of our dry-aged blend a week, which is not that much, but it's a fair amount. We grind a couple of thousand pounds of our regular angus, and we still buy a lot of product from our big grinder up in Hunts Point, who does a lot of the patties and the commercial work, so we do that business as well.

What kind of grinder do you use? GF: Just an industrial grinder, we have a special setting that we set it on.

How do you make burgers when you're at home? GF: I don't. I'm more of a barbecue type of person. So, I like a steak. That's what I grew up with. I grew up with ribs, brisket and sausages. We went and had burgers or hot dogs, but it wasn't what I really loved. So, you ask me if I cook burgers at home? Doesn't happen. MS: I am a ground beef guy, and I love hamburgers. I put them on a hot grill, I get them really marked, and then I move them to the indirect heat. And then to me, it's always about Swiss cheese, and a Martin's potato bun.

When was the last time you had a burger, George? GF: Well, we do a burger taste every week. It helps us maintain our quality, and we can see if there's variation from week to week. Hey look, we make a really good wagyu grind, and it's really high-fat, and it's delicious, and I made sliders for my kids a couple weekends ago when we were in Vermont, skiing.

How do you screw up a burger? MS: Some restaurant burgers are marked way ahead of time, and they let them sit there, and then they try and bring heat to them again. To me, a burger has got to be cooked to order. GF: Poor garnish and poor cooking kills burgers. They put stuff on there like tomatoes, when they're out of season. Why? Just caramelize some onions, throw them on there, that's enough. And use real cheese, not that plastic cheese, like a really good sharp cheddar.

What's your favorite burger outside of NYC? GF: Stage Left in New Brunswick. That's where I had a burger the last time. It's a really great little restaurant — great wine list, great food, and they do a stupendous burger. They use their own homemade bun, they use a little chipotle ketchup that brings a little heat into the mixture, the use really fresh vegetables, and they made their own pickles. It is a well thought-out burger.

What's the best thing to drink while making or eating burgers? MS: If I'm having a burger on the weekend, and I'm sitting in my backyard, it's a cold beer. GF: I'm not going to argue with that. If I'm having a hamburger, it's usually with a beer, but a Pilsner-style, not a dark beer. Then again, Zinfandel is pretty good.

So, why should someone pick DeBragga for burger meat over the other guys? GF:Because they're coming to us for our other great meats, like our dry-aged meats, and our great heritage breed poultry and pork. If they're coming to us specifically for ground meat, I think they're wasting their time. They're not getting the full experience. We're not here to just serve somebody's burger meat. If they want to have a really great, high-end protein selection, land-based protein, this is what you come here for.

How many purveyors are actually here now? MS: Right here in this market, there are like six or seven guys. And it's really just in this co-op. The guys across the street are gone. A lot of them consolidated, a lot of them sold out, a lot of them moved to Hunts Point and some of them moved to the Brooklyn Terminal Market, probably. Like everybody else, we work hard at surviving. We are loyal to people that are loyal to us, so that's the key to our business, having good relationships with the people we purchase from and the people we sell to. You can still make a living at it, but it's a lot harder than it used to be.
· All Coverage of Burger Week [~ENY~]