All throughout Burger Week, we're going to be chatting with the men who make New York's favorite burgers. Today: Tom Mylan. 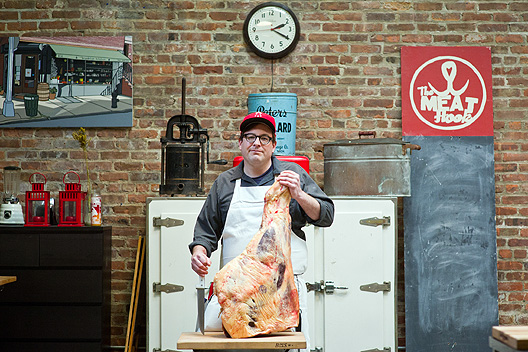 Tom Mylan is the head butcher and co-owner of Williamsburg's The Meat Hook. He sells a lot of ground beef to his customers at the store every day, and supplies burger meat to a handful of popular spots in the neighborhood. Tom also spent some time working in restaurant kitchens, and knows how to cook a killer burger.

What restaurants do you sell burger meat to? Tom Mylan, co-owner and butcher: We basically only sell to friends and family, that kind of a thing. Our two primary places are Pies 'n' Thighs and The Roebling Tea Room.

Roebling has a really good burger. Yeah, it's a really big burger — it's like nine and a half ounces. It's retarded. We also sell a little ground beef to Cafe Colette. Our blend is basically a 70-lean-to-30-fat ratio, and that comes from all different cuts.

What different cuts go into your burger blend? There's always short rib and trim from our dry-aged steaks. All of our meat is dry-aged. It hangs at the slaughterhouse for seven days minimum, fourteen days maximum, and that's before it even gets here. And then it could be here for another three to seven days before we break it down. Where do you get your meat from? We have one primary beef farm, it's Kinderhook in Ghent, New York. They have 100% grass-fed, 100% grass-finish — there's no grain at all. We actually have our animals grown out several months longer than most people do, and that's to get more fat. So, we have grass-fed steaks and grass-fed burgers that compete fat content-wise with grain finish. We have a couple of other farms that we're working with to develop our own sort of custom breed. We're helping them with bull selection, helping them find slaughterhouses, transportation into the city, and that sort of stuff. So, we just started this program a little bit less than a year ago with our other primary grass-fed farmer, and we're really not going to see the fruits of our labor until 2013.

So, that beef won't be available at The Meat Hook until 2013? Yeah. And we're looking at developing a grass-fed wagyu program, or wagyu-crosses. Really, what we're trying to find out is, "Okay, if you take a wagyu bull, and cross it with a grass-fed genetic angus, what do you end up with?" Nobody really knows, because there's a lot of things that people haven't done yet. Our angle is to have beef that grades prime, on grass, and to completely obliterate all of those sort of colloquialisms and olds wives' tales about grass-fed beef, the ones that say that it's lean, and it's gamey, and doesn't age well, and doesn't taste good, and it'll never grade prime. We've seen grass-finished animals that would've graded prime if they had actually gone through a slaughterhouse that grades, and those tend to be larger slaughterhouses that can actually pay for a separate guy that grades the beef. We use small slaughterhouses that couldn't afford it.

How do you screw up a burger patty? There are two things: one is making it too lean. If you have a burger patty that is less than 20% fat, it's not going to be juicy and it's not going to be flavorful, unless you cook it to medium rare, only. The other thing that you can screw up is grinding it only once. If you do that, you have really large meat particles, and unless you just really beat the hell out of it, put it in a stand mixer, or like patty-it-up and really massage it by hand to get those meat particles to bind to one another, you're going to end up with a patty that falls apart on the grill. So, we double grind all of our stuff.

What's your favorite burger in New York City? Honestly, my all-time favorite burger is the one at The Roebling Tea Room, but it's a little too big for me. You have to be in the mood for it, you have to be like "I am going to eat this burger, and then I am going to go to sleep." They do this thing called "Whopper sauce," that's basically like ketchup and mayo, and then they sauté the lettuce in there. And actually, that idea is from Stephen Tanner who owns The Commodore. He and Dennis, the owner of Roebling, are good friends, so he's like [in a nasally voice] "Yeah, man! Whopper style! Hot lettuce, man. Hot lettuce!" So I like the Whopper-style there, but for a "black and blue" burger, which is like black on the outside, not cold in the middle but really rare, the Diner burger can't be beat.

Do you have a least favorite burger in NYC? You know, I've had a lot of disappointing burgers. It's kind of like, "How do you fuck up a burger?" And in a restaurant, there's a definite way to fuck up a burger. To have a really good burger, you need to take that patty out, let it sit out and get warm, sprinkle it with salt and pepper, and let that seasoning get in there to make that meat pop, just like a steak. I've just eaten a lot of burgers where the meat isn't properly seasoned, or it's not good meat, and they try and cover that up with a bunch of goofy shit.

How do you make a burger when you're at home? Salt and pepper the outside of it, and kind of patty it around, and make sure the salt gets really worked-in there. I have a grill on my roof, but you can only use that like four months out of the year. So, generally I'll just do it in a cast-iron skillet, moderate heat, some oil or butter to get it to brown up nice.

Best cheese? I just like plain old American cheese. I'm from Southern California, so I grew up eating burgers with American processed cheese. I know like, I'm supposed to be a locavore guy, but American cheese just melts really well. What about buns? Martin's potato rolls, all the way. They have the right texture and they're a little bit sweet so they're reminiscent of a fast food burger. I hate, like, a fancy brioche bun.

What's the best thing to drink when you're making or eating a burger? When I'm eating a burger, I like root beer. Hamburgers are really like time machines. It's nostalgia. I grew up going to this place Omega Burger with my dad, and I'd have a root beer, so that's what I like. And if I'm grilling, I'm drinking a beer. A plain old, American, fizzy, flavorless beer. I like Busch. We always have a 30 rack of Busch here at The Meat Hook. It's kind of like alcoholic water — it's really crisp, it's fizzy, it's refreshing, you can drink a few of them and not be drunk. Because that's the problem with craft beer — it's great, it's amazing, but it's not right for grilling, because you're out, you're hot, you're sweaty, and you drink two or three of those high alcohol beers, the next thing you know, you don't want to eat anymore, because you're full, you're drunk, and you're acting out. So I like to keep it really simple.

What's your favorite burger outside of NYC? In-N-Out, although I have to say, I ate at In-N-Out the most when I was a vegetarian. We would always get a Double Double Animal-Style, which is like grilled onions, and two burger set-ups, and cheese. It's basically like the world's best grilled cheese with shit on it.

How long were you a vegetarian for? Oh, like two and half, three years. My best friend was a vegetarian for seven years, and like a lot of things, I was dating this girl. She was a vegetarian, but she didn't have this whole "Don't eat animals! It's wrong!" attitude. She had a reasonable point of view. She was like "It doesn't make any sense to have these animals imprisoned in these unhealthy conditions, and feed them grain that you could feed people with." So, I originally stopped eating meat because of the way it was produced. I never thought about it before. And in a weird way, becoming a vegetarian was a first step towards becoming a butcher. I stopped eating meat because I didn't agree with industrial agriculture, and I started eating meat again when I moved to New York because there was farmers' markets. My girlfriend, who is now my wife, we both worked at Murray's Cheese, and we didn't make money, really, but we'd get our 16 dollars together and go to the Union Square Greenmarket and go to Flying Pigs, and we'd be like "Oh yeah, we want that big pork chop, here's 16 bucks" and that's kind of how I started eating meat again.

When was the last time you had a veggie Burger? Because I work at a butcher shop, when I'm not here, I eat a lot of vegetarian stuff. I eat a lot of salads, and falafel, and veggie burgers. I went to Dumont Burger, and they had a falafel burger, and, wow. It was real heavy. It was giant, it was like three inches thick or something.

Have you ever done a burger at The Meat Hook's brunch? We have done a burger. Our second or third brunch, I did a burger for four, that was basically four Martin's rolls that hadn't been separated, and we just kind of cut them in half, and used a giant patty. We've done a bunch of different iterations of the burger. I really love an Ortega burger with roasted chilies. My Ortega sauce is basically roasted jalapenos that have been chopped up and we do a very Whopper sauce kind of thing where we cook those in a pan with mayo and pepperjack cheese, and then we just pour that over the top. Usually, Thursday morning is burger morning. We have a very particular subset of our crew then — I'm here, one of my partners Ben is here — and around noon, when the second shift comes on, we'll pause what we're doing and someone will make the lunch/breakfast for the day.