Starting tomorrow morning—pending a successful health inspection this afternoon—Momofuku Milk Bar in the East Village will be located at 251 East 13th St., directly across the street from its original location. This move will come as no surprise to close Momo followers, as Christina Tosi & Co. signed the lease on the space a few months back and appeared before Community Board 3 for a liquor license for the space. Now that the baking for the three Milk Bars takes place in the Momofuku Commissary out in Brooklyn, they have the luxury of moving into this small storefront, leaving the old Momo Milk Bar space to the boys at Ssam Bar. Tosi tells Eater that Dave Chang is giving his Ssam Bar crew, riding high from their inclusion on the World's 50 Best Restaurant list, a month to figure out how they want to reconfigure the space and decide whether or not they want to introduce any menu changes or the addition of a bar when the space reopens.

As for Momofuku Milk Bar 2.0, it will have much the same menu as the original. They'll serve six breads—three croissants, a bagel bomb, a vegtarian bagel bomb, and corn bread with jalapenos and cheese—along with the usual roster of cakes, pies, cookies, and ice cream. The soft serve flavors will rotate at all of the Milk Bars at the same time, once every three months, and the cakes and cookies will change as well. The team is considering offering pork buns and veggie buns, and now that they have their liquor license, boozy shakes. 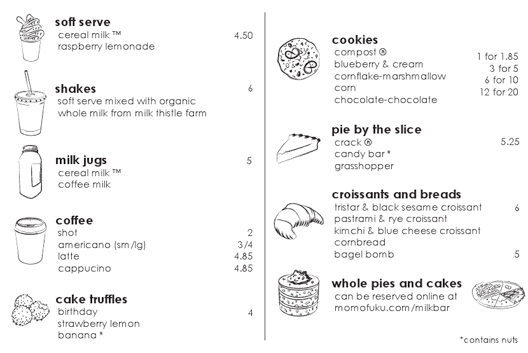 Meanwhile, out in Williamsburg, the Milk Bar there will evolve into a more straightforward storefront (right now they have a limited selection and only take cards). Also, it will become a place to taste test new cakes and cookies they're working on for all the locations.

Stay tuned to find out more about what will happen to Ssam now that the space is cleared out.
· All Momofuku Milk Bar Coverage [~ENY~]