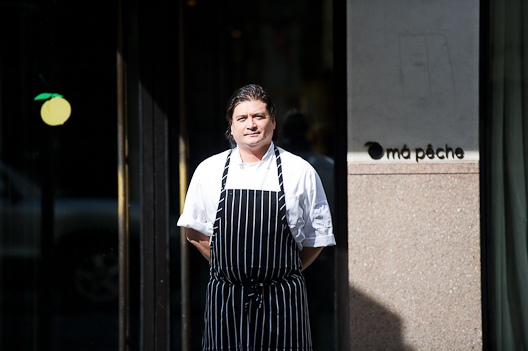 Má Pêche is the Momofuku restaurant group's first project above 14th St., their first place with a big, splashy dining room, bar and mezzanine, and their first step away from from the eclectic, Korean-influenced fare that is such a hit downtown. It is also the first restaurant where chef Tien Ho, a veteran of the Ssäm Bar, is a partner along with David Chang. Má Pêche wasn't an immediate critical darling like its predecessors, and there have been a lot of changes in its first year, including a few notable staff departures. But through it all, Tien has kept his head down, working to improve upon his original vision of a modern French Vietnamese bistro. We recently sat down with Tien to hear the story of the first year of Má Pêche.

How did you and David conceive of this project? Tien Ho, executive chef and partner: Everything we've done has been a collaborative effort, and David's view of the whole project was to give me a chance to have my own stage. So that's what this place was about — an ability for me to have my own stage, and just kind of expand the company. I think we were very clear in the beginning that we did not want another Ssäm Bar or another Noodle Bar. We wanted it to have its own identity, and that was a big challenge. The concept going in was a French Vietnamese bistro, and I think that we have still kept that identity. Certainly there's been a lot of changes throughout the year, but I think, by heart, it still is a French Vietnamese bistro.

Did you look at other restaurants for inspiration? Oh god, yeah, absolutely. I'm constantly looking at what other people are doing and finding inspiration or influence, or just guidance, really. This is such a difficult business, and I feel like so many times I don't have the right answers to everything. It helps a lot to talk to people. Who did you talk to? Oh, lots of people. I talked to Andrew Carmellini, my boys Mario Carbone and Rich Torrisi, Wylie, David and I talk all the time, and I talked to the guys at Ssäm Bar.

How did the opening of the mezzanine go? The mezzanine was tough. We really didn't have much of a staff, it was just myself, my sous chef and another cook to do room service and this whole mezzanine thing. A total of three of us. We were eager to get started, and we had this stage to do it. Obviously, the restaurant was still under construction, and there was this beautiful mezzanine that wasn't being utilized, so we thought "Wow here's a great space, let's just do it." Kind of like a pop-up, if you will.

And how was the opening of the main dining room? God, it was tough. I think that literally they had just finished the floors the night before. I was really so anxious to get things going. We had been waiting for so long, and we were so amped to open. So, when we did have the green light, we were like, "Let's go for it." That whole six month period, I was just so focused on trying to figure out all the little details. Like "Wow, how are we going to change that lightbulb up there?" It was those little things that I was so worried about, no so much about what everybody else was thinking. Friends and family was tough because we were cooking for a crowd of our peers, and we set it up in a way where it all came at once, where we had a feel of that big rush, because we knew that lunch was going to be like that. Boom. And when we did finally open for lunch, the first few days were not crazy, but I think by the second week it became really busy.

How was the start of dinner service? We thought that we would just open and we'd be packed, but we weren't as busy as we anticipated for the first few weeks or months. Was that disappointing? It was. Because again, we were so amped up to go full speed, and we just didn't quite get there. Now things are really cranking, but my memory of the first few months was that I just kept thinking to myself "Man, I wish we were a little busier."

Did you do anything to turn that around? It pushed us to figure out what we could do to make it better, better, better. How to be better. That's when we really started playing around a lot with the food and the menu, and experimenting with a bunch of different things. A lot of people were thinking "Oh, we're bringing a little bit of downtown to Midtown." But that wasn't necessarily the case. It was us trying to adapt to this environment. And while some things worked downtown, it just did not work up here. Whether it be food or service, or all of those things combined. So we had to make a lot of adjustments.

What did you adjust in terms of the food? Well, for the first time we've seen so many more allergies — shellfish allergies, peanut allergies — all legitimate allergies. So we've had to adjust the way we deal with those issues — that's mostly a service thing. As far as the food was concerned, we just noticed that certain things sold better than others, and certain dishes worked better than others, and we wanted to make the food a little bit more approachable, if you will. It was just a constant process of figuring out what works and what doesn't work. And you never know what works and what doesn't work until you finally do it.

A lot of the big critics liked the food, but mentioned that the project lacked some soul or sizzle. Did you think they were just judging the room too harshly? That's a great question, and I still don't know how to answer it. I mean, as I recall, Adam Platt loved the food but really disliked the room. And you're right — a lot of them had mentioned the "soul," if you will, the "downtown soul." And my response is "You know what? We're in Midtown. We're not trying to bring downtown to Midtown. We're trying to do something new here." It's impossible. It's impossible to bring that truly downtown feeling to Midtown. I think this is a gorgeous space, but you're right — It's not 12th and 2nd Ave. It doesn't have that feeling of the East Village, but you shouldn't expect it to, because we're in a completely different space.

Did you ever think that if you opened the same restaurant with 30 seats in the East Village, the critics would have felt differently? That's certainly crossed my mind, but I try not to think about that too much. We really just try to focus on doing the best that we can. Putting out the best food that we can, and having the best service that we can, and that hopefully, everything else will just fall away. We hope that people will just walk away from here and say "Wow, you know what? I had a great meal, the staff was awesome, I'm going to come back." That's all that I ever think about or hope for with this restaurant. I cannot change the perceptions of our guests about the space. However, I believe that we definitely can change the perceptions of our guests by the food and by the service. And so, why focus on some things that we can't change? Let's focus on some things that we know that we can change with our guests. And that's what we did.

Over the course of the first year, the restaurant lost three key team members: Cory Lane, Colin Alevras and Christina Turley. What was that like? Wow. The staffing changes have been really, really tough. Those guys were so instrumental to us opening, and to this place. Those were great people that I've worked with for a long time, and known for a long time, but they went on to do what they want to do. It's certainly been difficult and challenging for us, but I always hope that change is for the better. I can tell you, those guys are greatly missed. But the staff that we do have now, and the staff that we've brought on, are all so awesome. They are super dedicated, they are knowledgeable, passionate.

How's business these days? It's okay. It's better than before. It's okay, but we're always trying to push to be better, and hope to do better. But business-wise, I'm happy with the direction that we're going, but we can always be doing better.

Would you ever expand Má Pêche to a different location or city? Oh god, I have no idea. We have a team of people focused on that. I'm having a hard enough time trying to keep this thing going at full speed. My focus is just here, and trying to run this place as best as I can.

How is this restaurant different from any other you've been a part of? Where do I begin? That's huge. This restaurant, one year in, from day one, is so different. You know, the way I always look at a young restaurant is that the first few months, you're an infant. A year later, you grow that much into your teenage years — you learn so much. It's also a confidence thing. After opening for a while and really working and getting comfortable with the space, you get more confidence.

So, do you feel more comfortable with the direction of the restaurant now? We certainly feel a little bit more comfortable now, in this space, but I think that the comfort isn't about "Oh yeah, we're comfortable." Before it was like "Wow. What the fuck." Now it's, "Okay, you know what? We know that this works," or "Hey, let's focus on this, let's make that better." I can assure you, every day, it's something different. But I think the difference is, since day one, we feel that we have worked really hard to make this better and better and better, every week. And I feel like the food now is better than it's ever been. It's just the staff thinking and feeling more comfortable about this space. It's one of those things that just takes time.
· All Coverage of Má Pêche [~ENY~]