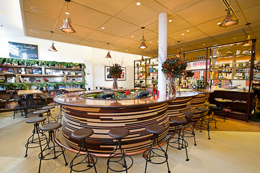 Marcus Samuelsson’s Red Rooster has become another symbol of Harlem’s new dining revolution. His eclectic interpretation of American comfort food and the ethnic diversity of his clientele has been celebrated by critics, making the restaurant—almost overnight—the neighborhood’s main dining draw. Its success is more proof that Harlem is becoming a legitimate food destination, but its wine list suggests we may need to wait a little longer for the drinks revolution.

The list is helmed by Christian Post—a former bar manager at Aquavit who graduated to Wine Director before moving on to run programs at Artisanal, Riingo, and Lure. His enthusiasm is infectious, but, unfortunately, the wine selections are not. There are clear indications that Post knows his stuff, and his idea to offer one Old and one New World expression of every variety he carries on the list is fun and potentially educational, but there are a lot of selections here that are simply uninspired. In other words, Post seems to frequently lean on the bigger names rather than digging around to unearth what lies beyond, say, Jaboulet and Perrin in the Côtes-du-Rhône category.

The selections are skewed slightly toward the New World and include a grip of wines from South Africa, a nod to Samuelsson’s heritage. The rest of the list weaves in and out of the Old World, highlighting a few staples that are priced reasonably enough to ensure you get out under $70 with a solid bottle. But pricing ranges from above standard in the mid-range to over-the-top on many of the “Reserve Wines” (see: ’07 Flowers Chardonnay ‘Andreen-Gale’ at $134 or ’05 Il Palazzone Brunello at $229, to name two), which makes it very easy to evade them all together.

In terms of composition, one of Post’s goals is to include “as many buzz words as possible,” which he explains as an intent to focus on wines that are in fashion at the moment and recognizable to his varied clientele. But this doesn’t mean cru Beaujolais or grower Champagne as it might below 14th St; to him it means Mumm Napa Brut Rose, Cava, and California Cabernet. However, despite the markups and often lackluster selections, there’s still enough silver lining here (and if all else fails, an interesting cocktail list) to ensure that, at the very least, no one leaves thirsty.

Bang For Your Buck
Gruner Veltliner, Hirsch, “Heiligenstein,” 2009, $56
Classic GruVe from one of the finest vineyard sites in the Kamptal. Hirsch is a reliable go to and though pricing is above standard it’s still a solid wine for the price.

Chardonnay, Porter Creek, “George's Hill,” 2008, $70
Porter Creek is making excellent, under-the-radar wines out of the Russian River Valley. A far cry from the big, bombastic chards that lurk around these parts. Crisp, with plenty of CA–style fruit density. Versatile with the cuisine.

Bourgogne Rouge, Michel Lafarge, 2007, $66
Lafarge produces some of the most stunning classic Burgundy out of Volnay. His lower level wines like the Bourgogne Rouge and Passetoutgrain are always solid go tos that drink above their respective price points.

Zinfandel, Chateau Montelena Winery, 2007, $68
Chateau Montelena has been immortalized for their legendary classic California Chardonnay and Cabernet, but their small production Zinfandel is one of the estate’s best kept secrets. It’s a rare Zin that’s truly built for the table (i.e. high in acid and lean by Zin standards).

Off the Beaten Track
Cabernet Franc, Sugarleaf Vineyards, 2008, $62
Rare to see anything from America outside the big four (California, Washington, New York, and Oregon). Nice little cameo from Virginia, one of America’s oldest winegrowing states.

Crowd Pleaser
Carignan/Petite Sirah, Lioco, “Indica,” 2008 $48
It’s no secret that we are fans of the old world and we love Lioco for bringing a breath of fresh air to CA by producing hand made natural wines at gentle prices. This proprietary blend is sourced from vineyards in Mendocino and is an excellent bridge between Old and New World.

Under $40
Triennes, “Cinsault Rose”, 2009, $38
The joint project of Aubert de Villaine (DRC) and Jacques Seysses (Dujac) established in the 1980’s to explore the terroir of Provence. A value-driven 100% Cinsault rose.

Break The Bank
Chassagne-Montrachet, Ramonet , 1er Cru “Morgeot,” 2007, $147
There isn’t much on the top end that is priced well enough to avoid regretting a splurge, but pricing here—though still a bit high—is reasonable enough to feel OK about going long on one of Burgundy’s best producers.

WTF?
Shiraz-Sweet, Jam Jar, 2009, $28
According to wine director Christian Post, off-dry wines tend to do well in the restaurant, but including a sweet Shiraz from South Africa called Jam Jar? Hard to imagine this is all that far off from Boone's Farm.

Brunello di Montalcino, Il Palazzone, 2005, $229
The pricing here is far too high to dig into a wine that should still sleep several more years before drinking. A fine producer and a fine wine, but not at $229.