Share All sharing options for: Jim Chu of Jo's Shares his Dream Journal

Welcome to Eater Dream Journal, where we ask chefs and restaurateurs to write down their dreams for a week and share them with us. Today, Jim Chu, the co-owner of Nolita hot spot Jo's. 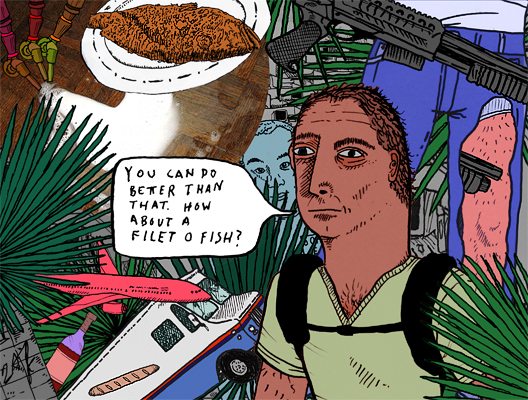 Tuesday
I am in a large office space densely populated with cubicles and office drones. I somehow know that they are airport administrators. I walk around the perimeter of the cubicle farm, and nobody notices me. I don’t know anyone there. Suddenly, I am at a restaurant on a tree-lined street. The trees are old growth, like some of the oldest trees in Central Park, but it’s definitely urban. It’s comfortable, but I don’t think I’ve ever been there. It might be the dream version of my own restaurant. The beer tap has thirty handles on it, instead of four. The base of the beer tap looks the same, but the taps are bristling out of the head of the tap impossibly close to each other. As I am mystified by the gleaming porcupine, I notice someone I know is definitely not David Chang, but I don't know.

Note: After the Timeout awards there were some folks from Valrhona at Jo's. I think Not David Chang was one of them.

Wednesday
I am walking down a crowded street, not like Times Square, more like Greene Street in the summer, when even the overflow traffic from Broadway is strong. It is sunny and cold. I feel uncomfortable and self conscious because I am carrying a shotgun in the leg of my trousers. I feel nauseous, suddenly, and a silver bread van backs up on the sidewalk and every body runs. I freeze, as the van backs straight towards me, engine revving furiously. I brace for impact, but something else happens. I am standing in a corner between a building and the outcropping of the entrance, and the truck’s bumper is too wide to get at me. The truck rocks back and forth trying to reach me, but I prevail – waking up with a start.

Note: Our bread purveyor raised their prices one week after this dream.

Thursday
I don’t recall ever having a dream about sleeping before, but two years in the restaurant business I should know to expect the meta.

My wife (who I am separated from) is lying in bed with me. I am naked. She is fully dressed. She tells me we should be able to talk to each other about our problems. I want to cover myself but she is on the sheets. I roll over the other way, and there is a paramedic where the nightstand should be. I have an urge to get a storage space under an assumed name.

Note: This is so literal it's sad.

Friday
I am in Miss Lily’s. I have never been inside, but I know that’s where I am. The walls are blue, the ceiling fans spin slowly, and there are painted palm fronds on the walls. The sun is shining, the bustle of West Houston Street is palpable but mute. I am so relaxed. There is a small table of food, some of the favorite things I have had from the Caribbean – conch fritters, jerk chicken, fried snapper, and a clear bottle of what has to be home made scotch bonnet pepper sauce. I don’t eat, but instead I am suspended in this beautiful elegiac moment, perfectly satisfied.

Note: Serge Becker is a guy who is two degrees of separation from me. We have a lot of friends in common, and I know people who work for him, but it’s not like we’re friends. My imagination of his life with established, successful restaurants is looking over the proverbial neighbor’s fence.

Saturday
Server calls out for brunch at 7AM. Too stressed out to remember.

Sunday
Runner is a no show/no call (claims schedule change) — no sleep, no dream.

Monday
I am at a McDonalds counter. There is no counter person. It’s gigantic – the end of the counter stretches into the horizon. There are enough lights in there to roast a pig. Everything is spotless. I look up at the board and the Big Mac catches my eye. Out of nowhere, my chef appears. He is in street clothes, with his knapsack over his shoulder. He looks at me with disdain, and while talking too closely says, “C’mon, you can do better than that.”

Note: Last week we were going out for a bite to eat after work. Faced with the prospect of going the the local sub par burger joint, chef and I just went to Tom and Jerry's and destroyed the snack mix.