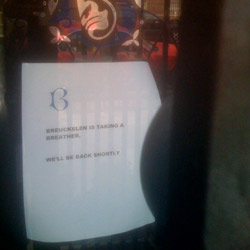 1) Hell's Kitchen; Life with Food and Drink reports that Bai Cha, a nine month-old Thai spot, an offshoot of the nearby Chili Thai, is closed. [LWFAD]

3) Cobble Hill: Cobble Hill Blog suspects that new restaurant Breukelen is closed after less than a year in business, and a sign on the door confirms they're "taking a breather." The restaurant opened in the space of Cafe on Clinton, a standby in the neighborhood, just last August. [CHB]