What to do When a Cockroach Falls on a Diner's Head?

Share All sharing options for: What to do When a Cockroach Falls on a Diner's Head?

It's Friday and it's time to hear from the crowd. Starting now, we'll start regular open threads to try to answer some burning reader questions. Have something you want discussed among the fine Eater readers? Send it this way. 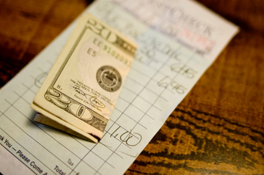 To begin, a story from a reader after a night at a very popular, one could call it a media darling, Italian restaurant downtown. The name has been redacted because, well, we actually still want to eat there:

We're in the middle of dinner at [redacted], which was great by the way, when a huge cockroach falls off the ceiling into the hair of my female coworker. She freaks out, the busboy comes and kills it, wraps it in a napkin, and whisks it away. The staff was apologetic, and I know that things happen, it's fine -- but I was kind of surprised that they didn't comp something, given the situation. Instead of taking a bottle wine off the bill or something useful, they sent three desserts on top of the two we had already ordered, leaving us with the same bill and too many desserts.

Reader question: What should the GM have done?
· All Coverage of a Related Feature, Complaints Dept. [~ENY~]