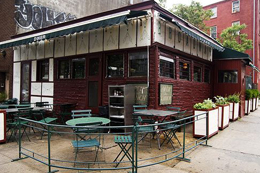 Andrew Tarlow and Mark Firth’s two staples of Williamsburg dining—Marlow & Sons and Diner—have remained relevant even with the new slew of Manhattan restaurateurs looking to capitalize on the hood’s new found chic. Marlow & Sons, which opened in 2004 and Diner, which opened in 1999, were two of the first restaurants to really tap into the ethos of Williamsburg—or the Williamsburg of yore, before rising rents and waterfront condos—with restaurants whose interiors beg for Fleet Foxes on loop and food that channels the spirit of Brooklyn’s locavore movement without becoming a parody of it.

Sleepy and unassuming under the bridge, both restaurants serve food that is often much better than it needs to be and sport wine lists that are brief, unpretentious, and fit seamlessly into the restaurants and their young, adventurous clientele.

The lists are both brief—hovering somewhere near 100 selections, collectively—but there’s not a whole lot that you won’t want to drink. The focus is on wines from France and Italy that fit into the biodynamic/organic/non-interventionist ilk and there a whole lot that ventures outside the portfolios of Joe Dressner, Neal Rosenthal, and Kermit Lynch. For those who have spent a lot of time browsing the shelves at wine stores like Chambers Street or Uva Wines, the lists will likely look a lot like an inventory of your wine fridge, or at least the one you want to have. In this sense, there’s nothing really groundbreaking for the well-acquainted, but the point is not to stump wine’s hipster faction. The point, in Tarlow’s words, is to choose winemakers who “are generally like minded, and would be part of our community here if they lived close by.” It might be a bit of a stretch to imagine Emmanuel Houillon drinking Pabst at Union Pool, we understand what Tarlow is getting at. He wants to highlight creative, artisan producers that favor authenticity over polish.

In terms of pricing, the lists are more than fair, and if you’re arriving with an entourage, at each restaurant you’ll be met with a page of big bottles all priced much lower than you’d expect to see at any other place in Brooklyn, let alone Manhattan.

Marlow & Sons and Diner are both restaurants that have established themselves as worthy of a trip over the river and, despite the changing demographic of the neighborhood, they are great examples of the simple pleasures of a wine list that’s just right for the culture of both a restaurant and its neighborhood.

Bang For Your Buck
Chardonnay L’Etoile 2001, DOMAINE de MONTBOURGEAU $58.00
From the petite L’Etoile region within the odd and enchanting region of the Jura. In typical Jura fashion the wine is slightly oxidized, salty, and trades fruit for minerality. Here and wearing some age and a reasonable price tag.

Chardonnay Arbois Pupillin 2007, EMMANUEL HOUILLON / PIERRE OVERNOY $62.00
Pierre Overnoy is one of the great pioneers of natural winemaking and an icon of Jura wine. The estate, now under the direction of Emmanuel Houillon, a former student of Overnoy’s, makes some of the most pure and genuine wines the region has to offer. Give it some to time to open up.

Touraine Gamay 2009, NOËLLA MORANTIN $42.00
Though Gamay’s spiritual home is arguably in Beaujolais, the Loire Valley produces a variety of stunning riffs. Here, from a relatively new producer is one of the finest examples of how well the grape does here. Brisk, spicy, and versatile.

Pinot Meunier “La Rouge est Mis” 2009, THIERRY PUZELAT
Pinot Meunier is most often one of three main grape varieties allowed in the production of Champagne. Here Puzelat, another one of the PMs of natural winemaking, vinifies the grape into a dry red table wine. Peppery and fruit forward.

Off The Beaten Path
Chardonnay, Viognier “Blonde“ 2008, ANDREA CALEK $45.00
A card-carrying member of France’s lunatic periphery, Calek is as fringe as they come. He lives in a trailer amongst his vines in Ardèche (SW France), but his wines—when he nails them—are beautiful, raw representations of the varietals and their terroir. Here a cloudy cider-like petillant naturel wine (a sparkling wine to which no sugar or yeast are added).

Break The Bank
Pouilly-Fuissé “La Croix“ 2007, ROBERT-DENOGENT $155.00 (1.5L)
Excellent wines from the Kermit Lynch portfolio that drink far above the Pouilly curve. The La Croix is sourced from 80-90 year old vines planted in blue schist and limestone, giving the wine great depth, structure and mineral complexity. Deserves a bit of a decant.

Corbières “Rozeta” 2009, MAXIME MAGNON $105.00 (1.5L)
Another quirky naturalist from the Languedoc (Corbières to be exact) who first cut his teeth in Beaujolais under Yvon Metras, one of the region’s greats. This is a classic field blend of mostly Carignan (sourced from 80-year-old vines) and a bit of Grenache, Cinsault, and Syrah bottles unfined and filtered with little to no sulfur added.

WTF?
In the context of both the neighborhood and the affordable food menu at Marlow, there should be a few more selections under $40. If three star restaurants in NYC can do it, Marlow should be able to throw a few bones to its waning broke artist population.

Tant-Mieux Pétillant Naturel Rosé NV, PHILIPPE BORNARD $60
Another Pétillant Naturel—or more affectionately, PetNat—wine, here from the Jura. This 100% Poulssard (or Poulsard) rosé sparkler is made by allowing the still wine to ferment to around 6 degrees of alcohol, then transferring it to the bottle to complete the fermentation without adding any sugar or yeast. The resulting wine is around 9% alcohol with a tiny bit of residual sugar. Adult soda.

Bourgueil "Trinch!" 2009, BRETON $48.00
Husband and wife team, Catherine and Pierre Breton, put out some of the most thoughtful, vivacious wine in the entire Loire valley. Here, in true Bourgueil fashion, juicy Cab Franc fruit with trademark aromatics of herbs and earth.

Off The Beaten Path
Bourgogne “En Montre Cul” 2008, REGIS BOUVIER $50.00
A lieu-dit (very generally, a vineyard of note) from an unusually steep for a Bourgogne bottling; most Bourgogne designated fruit is sourced from the flatlands. A whole lot of wine for the price.

Under $40
Bourgogne Aligoté 2007, ALICE ET OLIVIER DE MOOR $38.00
Alice & Olivier De Moor are part of the new guard of Chablis’ progressive winemakers. They farm organically and biodynamically and use native yeasts, large Burgundian barrels, and little to no sulfur. For their young vines Aligoté, they use tanks, and the wine can often take quite a while to ferment naturally. Clean and mineral-driven.

Break The Bank
Champagne "Fidèle" NV, VOUETTE & SORBÉE $175.00
Vouette & Sorbée: annihilating traditional notions of Champagne since 2001. A disciple of Selosse and an up and coming star in the region. The Fidèle is a fine introduction to the terroir-driven style of the producer. 100% Pinot Noir vinified entirely in barrique. Give it a little time to unwind upon opening.

"SP68" 2009, ARIANNA OCCHIPINTI $110.00 (1.5L)
In a very short period of time Arianna Occhipinti (only in her mid-twenties) has managed to achieve legendary status with wines that manage the warm southern sun with uncommon grace. This typical Vittoria blend of Nero d’Avola and Frappato is the product of extreme care in the vineyard (all biodynamic) and traditional/non-interventionist techniques in the cellar. Pure, bright fruit and great acidity.

St. Joseph 2007, DARD & RIBO $150.00 (1.5L)
Dard & Ribo have been gaining rightful attention as of late for their pure, classic wines from St. Joseph and Crozes-Hermitage. This is classic, pure Syrah that drinks above its price point. Could use a decant out of the mag.

WTF?
Tight and short. Nothing to waive a finger at here.
— Talia Baiocchi
· All Previous Editions of Decanted [~ENY~]
[Photo]