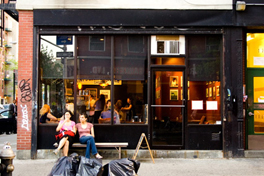 Last night's CB3 meeting went well into the wee hours of the night with a very full and rich docket. The room was crowded and hot, and some seemed to have shorter tempers than usual. Fondle Parties were discussed, a man from the Russ and Daughters family was there, and an old private eye said that sidewalk cafes are good because they help the NYPD by providing more eyes and ears on the neighborhood. Makes for a great night indeed! Here are some of the highlights:

1) Not a Bookstore LLC was seeking a full license at the community's favorite address, 200 Avenue A, also known as the old Superdive space. Not a Bookstore is hoping to bring a "salon," which they gave the full definition of in a long presentation of what they envision. They want a gallery/restaurant/artist's residency with a garden where they will grow herbs for the kitchen. The chef on the project is Daniel Eardley (of Chestnut in Brooklyn). It all sounds delightful until the community starts speaking. They were basically stunned because they had no idea of what was going on in the space until today. They were shocked that at a space so controversial, the applicants wouldn't reach out to the community and let them know what they were planning. They also felt that Not a Bookstore LLC was an insult because Superdive had originally applied as Rapture Café & Books. They withdrew their application and are heading back to the drawing board.

2) Tiny's Giant Sandwich Shop was back again hoping to get the okay for wine and beer. They had an additional four pages of signatures in support and they knew of no opposition; they've now had a notice in the window for about a month and a half. They voted to deny unless they agreed to certain stipulations including that they would never try to upgrade the application to a full liquor license. They gave it the go ahead because of the significant community support. Cheers!

3) Percy's Tavern over at 210 Avenue A was seeking outdoor seating. Normally sidewalk cafe applications aren't such a big thing... not in this case. As soon as the applicant finished speaking, Susan Stetzer, the District Manager of CB3 spoke about how she has never had more complaints so quickly after a place has opened, mainly about noise. The owner said that it wasn't them, they only had a small home stereo system, but the committee wasn't buying it. People also spoke out about the sidewalk being too small to fit outdoor seating. The application was denied, because the block they are on is too crowded already, and the overwhelming opposition and no community support didn't help either. The owner said he felt like he "was being punished for everyone else's mistakes." Sad.

4) 4AB LLC was there to try to get a transfer application for the former Tonda space at 235 East 4th Street. They wanted to keep the stipulations the space has currently (your usual variety about the restaurant operating as a restaurant, etc), but adjust the hours and amend the confusing stipulation about a service window on East 4th Street, where they're planning on serving grab and go pastries and coffee from starting at 8 AM. They are hoping to open a restaurant, but since 4AB includes some of the people behind Cienfuegos and Death & Co., the community was nervous that this restaurant would transform into a club. They tried to assure the community that this was a bigger space, that it is going to be a straight restaurant, and the chefs in the running are all well known and still have jobs (they wouldn't say names because they said "Eater would run them tomorrow"). They were eventually denied unless they agreed to the stipulations that were attached to the space with the modification of the window stipulation. Win.

5) The L'Asso owners were there seeking a wine and beer license for 107 1st Avenue. The space used to be a Korean BBQ, but it has been closed for about a year. Their new space will likely be called "L'Asso EV" or "L'Asso East" and will be more organic and healthy because they feel that's the way the East Village is heading. They were awarded their license with a deny unless they agree to certain stipulations.

6) The Other WineBar was denied their attempts for a wine and beer license. The space was hoping to open a restaurant with a tapas-style menu at 412 East 9th Street. Some of the reasons for the denial were over saturation and the fact that it was mid-block on a residential street.

7) Something by Preserve 24, a San Francisco transplant, was hoping to enter Houston Street right by Sugar Cafe in the old Economy Foam and Futon space. The concept would be two floors, with a 24-hour "Argentinean cafe" offering coffee and baked goods on the ground level. Downstairs in the lower level there would be a full service kitchen and bar where they'd serve comfort foods and offer blue plate specials. There was also talk of having Thanksgiving meals every Thursday. There will also be some sort of art element here. Preserve 24 is actually already in New York—they operate a restaurant at 885 Third Avenue.

The community felt this concept was kind of corporate and unfriendly. One board member said that the concept was "not very neighborhoody in the way that this is a... neighborhood." Well put. A third generation Russ and Daughters guy came out in opposition to the project, saying they neglected to mention that because of the courtyard in the back, the restaurant will cause noise ricocheting off the buildings that face the courtyard. They're also coming in from Cali to open this 24 hour spot that doesn't seem to be good for the tenants. However, they got their approval as the board voted to deny unless they made sure the walls were soundproofed and they stopped serving booze at 2AM downstairs.

8) South Brooklyn Pizza wants to expand and add some wine and beer. Right off the bat the owner said that South Brooklyn Pizza was known as the "best pizza place in New York City right now" and they came armed with over 2,000 signatures in support. Then someone mentioned "Fondle Parties," an event that has occurred at South Brooklyn Pizza which basically sounds like a grope fest. But it was okay, one committee member even said "nothing's wrong with a little fondling as long as it's consensual." The board voted to deny unless they agreed to stop serving booze at 1AM on weeknights and 2AM on weekends.

9) Ed's Lobster Bar was given the go ahead for their new location at 25 Clinton Street. A committee member from CB2 was actually there to support! She knew what CB3 wanted to hear and they were easily approved after hearing her praising comments.
— Jackie Goldstein
· All Community Board Coverage [~ENY~]