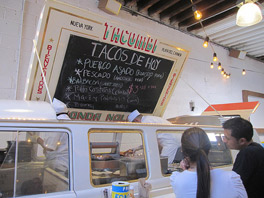 Last night members of Community Board 2 held an SLA Licensing Committee in a packed lecture hall at NYU's Silver Building. Nearly every seat was filled and there were about 10 people standing. Some big names were on the docket so let's jump right in.

1) Quimera, a new Spanish restaurant from the forces behind Rayuela and Macondo in the Lower East Side, is planning to open on the corner of Greenwich Avenue and Bank Street. The space at at 81 Greenwich Avenue was the former home of Artepasta and more recently Lips. The restaurant would have an entrance on each street and would essentially be two restaurants: Greenwich Avenue would be a casual paella bar while Bank Street would be more towards the realm of fine dining. Their artillery included a lawyer, a consultant, a stack of around 100 letters of support from members of the community and 14 people in attendance who spoke in support - one of which included John Leguizamo's mother. The main controversy was their hours. The restaurant wanted to remain open until 2AM, while CB2 wanted them to close at 1AM. At the end of a long process in which the restaurant owners left the room several times to discuss the negotiation amongst themselves, the Community Board voted in favor of a motion to deny unless they close at 1AM.

2) Tacombi was there seeking a beer and wine license. The owner had tons of support from the community, who praised his store at 267 Elizabeth Street and his short rib taco. A board member even said it was an "asset to the neighborhood." They have been open for around 6 months now and are hoping to serve "locally made organic brew" to go along with their tacos. The board voted to deny unless stipulations were met, including changing the closing time from 2AM to 1AM.

3) Gabe Stulman provided a boost of energy as he worked the room for Jeffrey's Grocery (at 172 Waverly Place), seeking a full liquor license (currently beer and wine only). Several people spoke in support of Jeffrey's saying it was truly a great neighborhood destination, where everybody knows your name, and your dogs name. In the end people were shouting out asking for reservations at his restaurants, and for him to open in their neighborhood. Not surprisingly, Jeffrey's was approved by all.

4) The Golden, a new project from Chef Laurence Edelman (Mermaid Oyster Bar, Mermaid Inn) is coming to the former Braeburn space at 117 Perry Street. Few details were given other than the menu is planning to be seasonal and that they will eventually serve breakfast, lunch and dinner. The former Braeburn chef spoke in support. The Golden was approved.

5) Currywurst at 182 Bleeker Street was on the docket seeking a wine and beer license. It just seems natural to have a beer with your sausage, right? They were hoping to serve 6 types of German beer, and also have 1 bottle of champagne on the menu. Unfortunately the board voted to deny mainly because they see too many complications with giving a license to a fast food restaurant. And one of the owners flew in from Germany just for the meeting!

6) Little Havana, a longtimer at 30 Cornelia Street wanted to upgrade their beer and wine license to a full liquor license so they could serve some mojitos, and they were also there in the hopes of extending their hours to 1:30AM. Even though one of the board members suspected the owner may be "on the way out," they approved.
-Jackie Goldstein
· All Community Board Coverage [~ENY~]
[Photo Credit]