Welcome to Dining After Dark, where we pay tribute to the best places to feast after a night on the town. First up is Chinatown stalwart Great N.Y. Noodletown. Got a suggestion or a favorite to share? Do let us know. 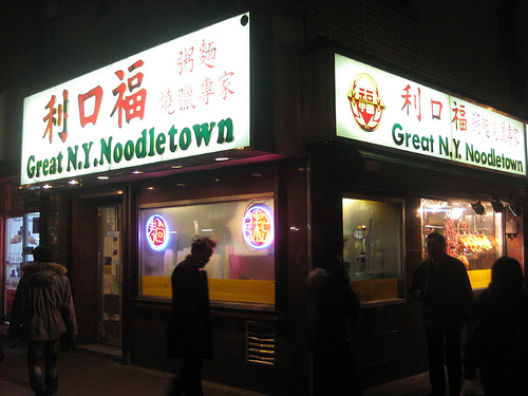 On the corner of Bayard and Bowery is a shimmering light acting as a beacon for late night feasting. So what makes Great N.Y. Noodletown (Noodletown for short) a top destination after a night of heavy boozing? First, it has to be its location. There aren't too many drinking options in the immediate vicinity, so chances are your trip to Chinatown requires a cab ride or a lengthy walk, committing yourself to a more serious eating session rather than grabbing the first slice of pizza or bodega bacon egg and cheese sandwich that you happen to see. Second has to be the hours of operation. Through many late nights and multiple trips south of Canal, Noodletown's sign has never been off. Unless you are rolling up at 6 AM, chances are strong that you will not be forced to wander the streets of Chinatown looking for barbecued meats and noodles.

Third is the scene. You may have spent the last four hours drinking in a dark bar or nightclub trying to slide up on a member of the opposite sex, but that all will come to a screeching halt once you walk inside. The dining room is bathed in stark fluorescent lights, filled with a mix of twenty something Asians who have been partying, restaurant workers getting a late meal before heading home, weirdos, and drunks like you. There is rock and roll playing ever so softly in the background, and the waitstaff will take your order and get some food on your table faster than a soup shucker at Hale and Hearty during the lunch rush.

Fourth is the price. They are practically giving this stuff away, especially when you have tossed a few back and are feeling loose. You should easily be able to escape after ordering five or six things (with a group of course, no need to be piggish) for less than $20 a person, an all around excellent value.

Most importantly is the food. Everyone has their own go-to place in Chinatown, but Noodletown has always been at the top of our list. Loved by the likes of Jeffrey Steingarten and an inspiration to David Chang and his Momofuku empire, the food isn't just great for Chinatown, it's simply great. So being able to consume its deliciousness at 3:30 AM makes Noodletown a late night no-brainer.

If you've never been, here are some menu items that we've found will never do you wrong:

And if you are ever there when soft shell crabs are in season and don't order them, well then you probably shouldn't bother to read this website anymore. Seriously. Cover everything you get in ginger scallion sauce and chase it down with one or two more beers and you'll be laughing.

On the flip side, well, when you walk out of there with a full stomach of intense Chinese food, you have to figure out how to get home, wondering the whole time how (and why) you managed to consume so much food. Head towards the off ramp of the Manhattan Bridge to wait for a cab coming back from Brooklyn to show up, make sure you drink at least one giant glass of water before you go to sleep and keep another by the bed, because you just consumed about three weeks worth of sodium. But wasn't it worth it?
· Nightlife Coverage [~ENY~]