Tolo Taco Tuesdays at Toloache; The Menu at Miss Lily's

Share All sharing options for: Tolo Taco Tuesdays at Toloache; The Menu at Miss Lily's 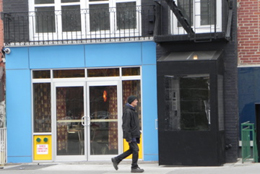 SOHO—Miss Lily's the somewhat secretive Jamaican restaurant from La Esquina's Serge Becker has been in previews to downtown's movers, shakers, and hotties for the past couple weeks. Today, they release a menu. Appetizers run from $7 - 11 and include cod fish fritters, smoked mackerel salad, and spiced pumpkin soup. Entrees run $15 - 23 and include a jerk pork burger, oxtail stew, and curry goat. Download the PDF here. [EaterWire]

SOHO—A Parlor Club representative asks Eater to clear up some inaccurate reports about their new venture. First, the name is Parlor New York and not the Parlor Club and second, the venue is still closed and won't be opening until May 1. One thing that is right is that there are only 100 members currently, but they will be expanding to 1000 members eventually. Start polishing those resumes. [EaterWire]

FINANCIAL DISTRICT—Starting March 8, every Tuesday is Tolo Taco Tuesday at Toloache Taqueria on Maiden Lane. That means from noon until 5 PM, all tacos are $2. [EaterWire]

WEST VILLAGE—Former Eater intern and all around great guy Zach Feldman runs a little bitters company called Bitters Old Men and they are awesome! If you want to try them, Adam Schuman will be pouring cocktails with them on Saturday's party at Fatty Johnson's. [EaterWire]