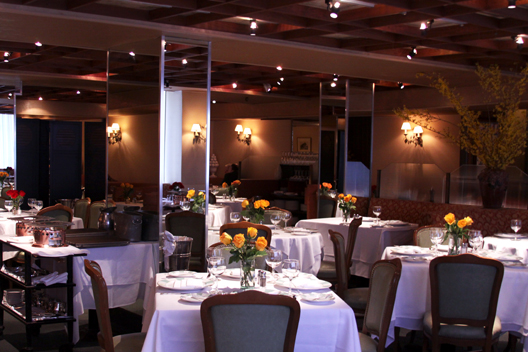 Our next recommendation comes from Doug Crowell, the host and owner of Buttermilk Channel in Carroll Gardens, Brooklyn.

"One of my favorite places to take my wife for a special occasion is Le Perigord, on 52nd Street.

In its heyday, Le Perigord was one of the most highly regarded restaurants in the city. When it opened in 1964, Craig Claiborne gave it four stars in the New York Times, and for the next thirty years everyone from visiting presidents (Richard Nixon, Ronald Regan) to movie stars (Charlton Heston, Elizabeth Taylor) dined there. The restaurant scene has changed since 1964, but Le Perigord hasn't, which makes it all the more a great treat.

Some things you'll find there that you will not find almost anywhere else in New York and may never have seen in your dining lifetime: Real silver, tableside carving, turbot, Dover sole, veal kidneys, soufflés (Grand Marnier or chocolate), gueridons, a real maitre'd in a tuxedo. You should experience these things. They are wonderful. Go to Le Perigord to see how a haricot vert should be cooked. Go to taste how great a quiche can be. Start your meal with selections from the buffet froid (you passed it on your way into the dining room). Could someone please revive this ritual? Have an artichoke vinaigrette. Have the foie gras maison.

The owner, Georges Briguet, is a lovely man with a genuine sense of hospitality. On your way out, talk to him about what it was like to open La Grenouille or ask him what Kissinger's favorite dish is. Then (with imaginary small dog and cigar in hand) take a walk around Sutton Place and imagine you live there."
—Gary Wong
· Le Perigord [Official Site]
· Buttermilk Channel [Official Site]
· Previous Editions of Dining Confidential [~ENY~]