O'Reilly's Pub, As Solid But Less Honored Than Keen's

Share All sharing options for: O'Reilly's Pub, As Solid But Less Honored Than Keen's 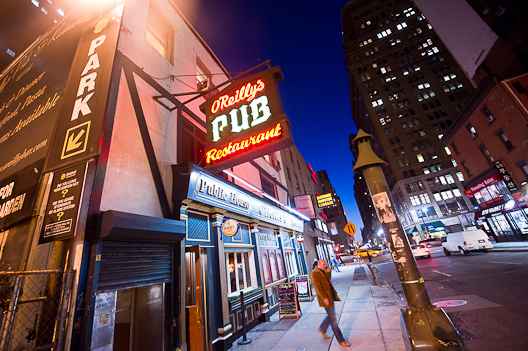 The trade was pretty brisk inside O'Reilly's Pub for a Wednesday afternoon at 2 PM. I expressed my surprise to the barkeep. "Just regulars and tourists trying to get out of the rain," he said. It was raining, and O'Reilly's made for an ideally situated shelter. Though it seems isolated on its odd, forlorn trapezoid on concrete, bordered by Broadway and Sixth Avenue, it's actually just three blocks from Macy's and Herald Square, and only two from Penn Station and the Garden. Because of this positioning, you'll get a varied crowd here on most days.

O'Reilly's has been O'Reilly's since 1975. Before that it was called Joyce's for another forty years. That takes it back to the fall of Prohibition. In a region of Manhattan that changes constantly, it feels like a cornerstone as solid as nearby Keens Steak House, albeit one far less honored. The interior isn't a preserved museum, a la Keens. It's been homogenized over the years and is a trifle anonymous. Still, the wooden booths in back are snug and the vibe is friendly. The bartender knows many of the people he's serving. And those he doesn't he'll still treat well—even the two gentleman who kept trying to order their Dewar's from the hostess, and who he termed a "general nuisance" under his breath.

The man next to me had a full head of white, flowing Irish hair. He said little and listened much to his stoolmate, who was unpacking several suitcases of Slovenian family history. "My father was born in Slovenia, just over the border from Trieste," he said. "He was captured and sent to a bunch of different concentration camps. His family thought he was dead, and he thought they were dead. But then years later he turned up in Switzerland, where he was working as a professor."

On the silenced television, the printed text on the screen showed that Secretary of State Hillary Clinton was saddened by the bombing in Jerusalem; was amazed by the Japanese people's resiliency; was hopeful for a good outcome in Libya. O'Reilly's patrons, meanwhile, had found their port in a storm. The rain continued outside. More beers were ordered. No one looked to leave.
—Robert Simonson