Remembering The Copain, a Bistro with a French Connection

Share All sharing options for: Remembering The Copain, a Bistro with a French Connection

Every once in a while we like to take a look at the rich history of a restaurant that is no longer with us. Today, a fine French dining room in Midtown East, The Copain. 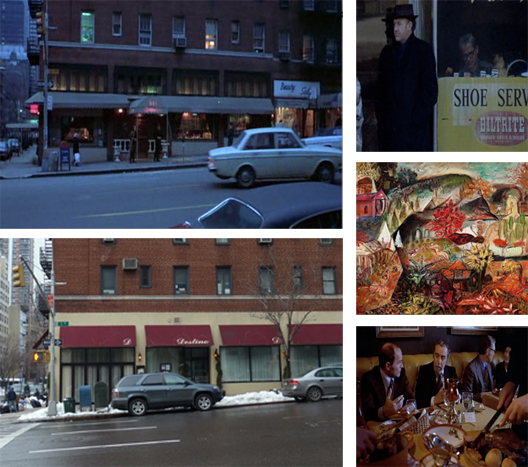 One of the best scenes in the classic 1971 movie The French Connection involves a stakeout at a New York restaurant called The Copain. In this part, two French heroin smugglers enjoy a leisurely, opulent meal, as hard-boiled cop Jimmy "Popeye" Doyle (played by Gene Hackman) stands across the street in the freezing cold, spying on them with a cup of deli coffee in one hand, and a slice of pizza in the other. It's a great little moment about dining highs and lows in NYC. And, as it turns out, the filmmakers couldn't have picked a better restaurant to communicate luxe European-style fine dining in the 1970s. Here's a look back at the life and death of The Copain. 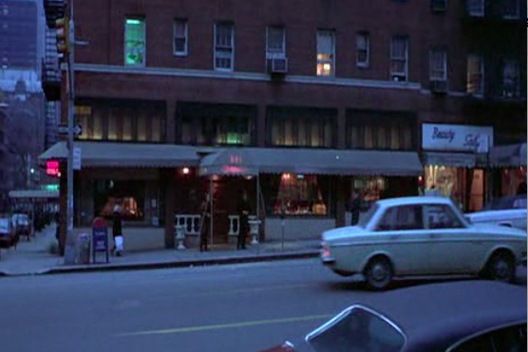 The Copain was opened in 1945 by a first time restaurateur named Ed Kerns, who had spent several years in the navy, including a stint managing an officers club in Bizerte, Tunisia. He developed a taste for French food in his travels abroad, and opened the restaurant with a menu full of the old-school classics, served in an elegant, somewhat splashy dining room. Even if the food was expensive for its day, the neighbors could afford it: The Copain was just across the street from Beekman Place, a two-block row of apartments then known as "the most exclusive enclave in Manhattan." Over the years, famous tenants included Julie Newmar, Irving Berlin, John D. Rockefeller III and Shirley McClaine.

Apart from fine food and wine, The Copain also offered something else that appealed to its rich and famous clientele: delivery. A Times article from 1945 describes the door-to-door service as a strange new phenomenon:

There is no deposit on any of the dishes in which the food is delivered, for the agent waits while it is transferred to one's own receptacles and then takes the containers back on the return trip. Depending on the main course, selected prices range from $2.10 to $3. French bread and relishes included. For delivery, you simply had to call the restaurant (phone number: PLaza 8-0554) and place your order before 6:00 PM. Artists That Showed at The Copain:

Menu highlights included: frogs legs, escargot, chicken a la king, rolled roast beef tenderloin, and shellfish platters. There was fussy tableside cart service, and the dining room also featured an ever-rotating selection of contemporary art on the walls. Some works were for sale, others were just passing through on their way somewhere else, but new arrivals at The Copain were frequently included in the city's fine art listings.

The Copain in The French Connection:

Before its brush with big screen fame, The Copain already had a solid reputation (in 1954, Craig Claiborne called it a "well-known landmark to many New Yorkers"). But the restaurant certainly gained some notoriety from its cameo in The French Connection — the table where actor Fernando Rey sat became the most requested seat in the house. In the context of the rest of the movie, the scene at The Copain is really one of the most human moments in the film. As the criminals are served sliced boeuf, French press coffee and profiteroles, the audience feels sorry for the poor mess of a cop watching the meal from across the street. This is the soft side of life that detective Popeye Doyle will never know. 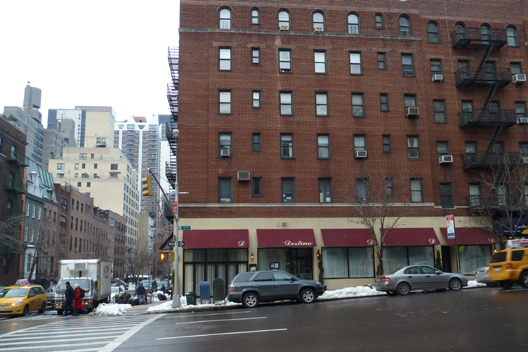 Still, two minutes of screen time weren't enough to secure the restaurant's popularity forever. The Copain didn't make it to the 1980s. After it closed, a BBQ joint called Wylie's moved in and had a solid 14 year run. For a brief time, it was an Asian place called Azaza, and now it's Destino, an Italian restaurant with a former Rao's chef in the kitchen. That awesome old awning and those cool brown doors are gone, and so is the soda fountain across the street. But if you like, you can still stand in the same shoe store doorway where Popeye froze, look across the street, and imagine a sumptuous French meal from another place in time.

Here's the clip from the movie:

· All Previous Editions of The Restaurants of Old New York [~ENY~]